...and there it goes 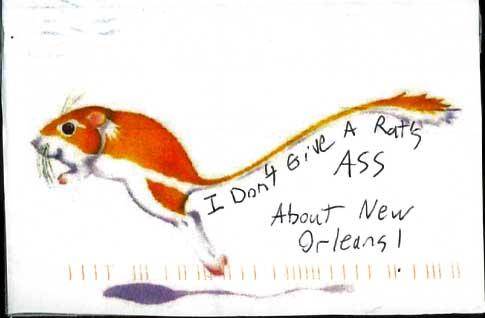 It's offical - people are now starting to not give a crap about New Orleans.

It's muggy as the day is long outside. The air is acceptable and makes for easy breathing. If you can believe it, I'm still running the A/C. In September. That's fugged up. Then again, New England weather doesn't really surprise me anymore.

I went out earlier and bought a jug of All laundry detergent. I tried that Tide "Cold Water" stuff to see if it would actually clean clothes in cold water. It does, but it just doesn't work as well as traditional hot-water washing so I switched back to All.

Pop called the realtor today. It didn't look good. The realtor is now saying "give me two weeks" which to me sounds like the prelude to impending doom (i.e. the house not selling and being stuck here).

I hopped online and scanned the apartment classifieds. I found five I liked. I called the first two, no answer. The third one I called answered. The guy renting the place out was very nice and openly admitted he was very picky about who he rents his place to. That's something I really liked because it means he doesn't take bums off the street. Essentially he wanted no college kids and no teens. I told him I wholeheartedly agree because I wouldn't want them around either in a living situation either.

The place is right in the middle of a major town in Maine which is exactly where I want to be. I want civilization, people and have work close by. The rent is a steal compared to anything you'd find around here in Connecticut. Heat and hot water included, hardwood floors, living room, kitchen and parking - and it's got cable for fast internet all set to go - cool.

I scheduled a showing for next week. If I like it, I'll take it. It's totally possible that in less than two weeks I will be out of Connecticut and up in Maine - finally.

Decided to change around the tempate again. Went with something a bit darker. A lil' change a pace is good sometimes. The last template almost lasted a month and a half. 😉