There is freezing rain falling from the sky right now and it's plick-plackering on my apartment windows. You know, I can only take so much of this weather crap, then it just gets on my nerves. This weather is not going to break until Thursday (most likely). 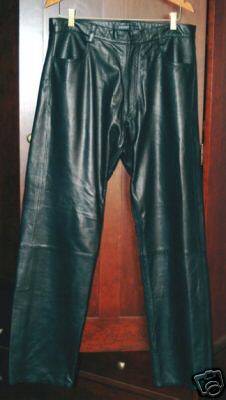 Quoted from an eBay auction:

You are bidding on a mistake.

We all make mistakes. We date the wrong people for too long. We chew gum with our mouths open. We say inappropriate things in front of grandma.

And we buy leather pants.

I can explain these pants and why they are in my possession. I bought them many, many years ago under the spell of a woman whom I believed to have taste. She suggested I try them on. I did. She said they looked good. I wanted to have a relationship of sorts with her. I'm stupid and prone to impulsive decisions. I bought the pants.

The relationship, probably for better, never materialized. The girl, whose name I can't even recall, is a distant memory. I think she was short.

Ultimately the pants were placed in the closet where they have remained, unworn, for nearly a decade. I would like to emphasize that: Aside from trying these pants on, they have never, ever been worn. In public or private.

I have not worn these leather pants for the following reasons:

I am not a member of Queen.
I do not like motorcycles.
I am not Rod Stewart.
I am not French.
I do not cruise for transvestites in an expensive sports car.

These were not cheap leather pants. They are Donna Karan leather pants. They're for men. Brave men, I would think. Perhaps tattooed, pierced men. In fact, I'll go so far as to say you either have to be very tough, very gay, or very famous to wear these pants and get away with it.

Again, they're men's pants, but they'd probably look great on the right lady. Ladies can get away with leather pants much more often than men can. It's a sad fact that men who own leather pants will have to come to terms with.

They are size 34x34. I am no longer size 34x34, so even were I to suddenly decide I was a famous gay biker I would not be able to wear these pants. These pants are destined for someone else. For reasons unknown - perhaps to keep my options open, in case I wanted to become a pirate - I have shuffled these unworn pants from house to house, closet to closet. Alas, it is now time to part ways so that I may use the extra room for any rhinestone-studded jeans I may purchase in the future.

These pants are in excellent condition. They were never taken on pirate expeditions. They weren't worn onstage. They didn't straddle a Harley, or a guy named Harley. They just hung there, sad and ignored, for a few presidencies.

Someone, somewhere, will look great in these pants. I'm hoping that someone is you, or that you can be suckered into buying them by a girl you're trying to bed.

I saved this one here as a PDF because it's too good to let go. 😉

.EU - yet another TLD no one is going to give a crap about

Here's a TLD (that's top level domain like .com, .net, et cetera) that you may or may not have heard about, .EU, which signifies "EUrope" most likely. You can learn more about it at EURid or you can get one of your own at GoDaddy for $19.95 a year.

Here's my take on TLD's:

The only TLD that anyone gives a crap about is dot com. While it's true there are a ton of TLD's in existence, the only one anyone ever remembers is dot com. Not dot net. Not dot org. Not dot-anything-else. Dot com. Get used to it.

This was supposed to be the end-all/be-all of TLD's because it was just... so cool, you know? Hardly. What's the one thing that keeps people from buying these? Price. Way too expensive. The only really successful dot tv domains I've seen are for - you guessed it - television channels.

Good idea, but these days a ton of mail servers block dot biz domains because many are spam harvesters. To register a dot biz is dirt cheap, but sheesh, why take the risk of being blacklisted?

Extremely cheap to register but extremely forgettable. I find that most people get a really confused look for any TLD that is more than three characters long. You tell them "Okay, it's dub dub dub dot my-site dot info" and they reply with "Um... dot info dot com?"

Most people I know equate internet with dot com. They assume all web sites end with that TLD, and to be honest, the majority of the ones they visit do. As far as they're concerned, if there isn't a dot com at the end of web site URL, it must not be a "real" web site then, right?

So now we have dot EU. Wonderful.

Personally speaking I would never want a TLD that pronounces as "eww!" Would dot EU be synonymous with "dot gross-me-out?" One has to wonder...