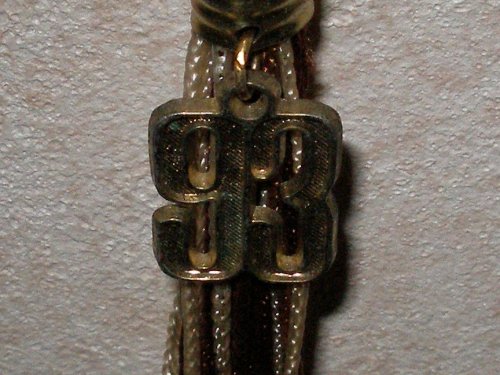 My '93 graduation tassels. For those who don't want to do the math, 1993 was thirteen years ago. I wrote here previously that if I did find my tassels they'd probably be yellowed with age. Well, they're not yellow, but definitely not as white (for the white strands) as they used to be. And it's a bit old looking because it's been sitting in a box for quite some time.

1993 was not exactly what you'd call a banner year but I did graduate from high school that year.

Things that happened in '93:

Bill Clinton is inaugurated as the 42nd President of The United States.

A Superstorm bringing record snowfall on the east coast of the United States occurred.

Hollywood madam Heidi Fleiss got raided by the Los Angeles Police Department (to which everyone said in their best sarcasm... "She was a madam? No... REALLY?!?!")

The Late Show with David Letterman premiered on CBS after he had left NBC.

Okay.. even though '93 wasn't exactly a hot year per sé, I still remember it.

Also, if you got your tassels, save 'em. And look at them from time to time (even if you hated your high school).

I can't say high school was good or bad for me as far as the whole experience goes. I just remember it as a period where I really didn't know myself very well. Fortunately I got out of that rut. But it's amazing to think that some never do...

Title of this entry comes from a song by the gloved one back when he wasn't white.

So cute it's disgusting: Two little rabbits eating out of a bowl. I guarantee you will watch this at least three times.

My family used to raise rabbits (along with Golden Retrievers among other animals) back in Connecticut. My favorites were the brown rabbits.

It is possible to house-train a rabbit and they make great pets, but I just don't have the patience. Well, maybe for a dwarf bunny. But not a full sized one.

Bob V is proving to be a fish that has quite the attitude. Out of all bettas I've had, this guy literally attacks food when dropped in the bowl, so much so that it splashes water.

He also prefers flake food over granuals. This is the first betta I've ever had that spits out granuals - literally. He won't eat them, or rather, he will eat them only to spit them out shortly afterwards. Flakes only for Bob V.

This Sunday marks the 27th of August, where I will be Orlando watching the Shuttle Atlantis fire off into the sky. Should be fun. 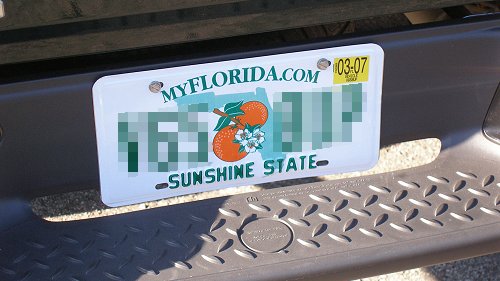 Note: Pixelation is done on purpose.

Welp, it's official, I now have true-blue Florida license tags. Actually, it's tag. They don't give you two plates in this state.

This is the fifth license plate I've had since I started driving when I was sixteen. The first four were Connecticut plates.

To anyone who would ask "Why so many plates?", the answer is that:

a) Connecticut assigns different tags depending on what kind of vehicle it is. Regular passenger cars (like the '00 Alero and '86 Camaro I had) will receive regular plates. SUV's and trucks receive what's called a "Combination" plate.

b) I was a two-vehicle owner for several years, and with the exception of just a few months, I always owned one car and one truck.

Florida to the best of my knowledge assigns passenger vehicles all with the same plate. Tow vehicles and those with GVWR of over 10,000 lbs. get different ones.. I think. I dunno.