There is a TORNADO WATCH in effect throughout the Tampa Bay region. I have to put that in all caps because all the local news people on the television love giving big flashing red warnings about anything that could be "severe". You could apply the caps to any weather term, like HEAVY RAIN, LIGHTNING, FLOODING.. you get the idea.

After 1pm the TORNADO WATCH will be over. After that, there will possibly be some HEAVY RAIN, followed by PLEASANT CONDITIONS.

This has been the first Christmas where there's been some LIGHTNING outside. I personally think it's cool.

A gift I received this year is some new Champion tees. If you ever asked yourself What's the best t-shirt made? the answer is Champion. There is nothing made better that lasts longer, period. I was getting sick and tired of buying tees that didn't fit right and wore out fast.

You'll spend about $12 per tee. Expensive? Yes. Worth it? Absolutely. In the long run you're saving money because a Champion tee will last about five times longer than those sub-$10 tees.

The Champion tee is the only t-shirt I will wear that has a logo featured on it (the little "C"). Since it's an understated logo it's okay.

Which ones did I get? The tried-and-true standard Champion tee, now known as the "Millenium Classic".

I've received some other gifts, but what I'm most happy about is being in Florida. I've really been taken by this place and I'm pleased as anything to be where I want to be.

I'm sitting outside at my Pop's place in a screened-in porch. There's a moderate rainfall happening at the moment. It's kind of neat that I can be outside (sort of) in a t-shirt, in the rain (again, sort of), and be using a laptop connected to the 'net at the same time. And it's Christmas Eve on top of all that.

It would seem that both here and where I used to live in Dayville is going to (most likely) have drizzly rain for today and Christmas Day. Whenever it rained during Christmas season and people complained about it back where I used to live, I would always respond with It's better than snow, because generally speaking, one inch of rain = one foot of snow. Think about that for a second. (grin)

Tomorrow in Tampa there will be thunderstorms abound - maybe. There's some activity going on in the Gulf right now which may head east towards the Tampa Bay area - or maybe not. It's too soon to tell at this point.

Even if there is some rain coming, that's perfectly okay. I can deal with warm rain. 🙂

this lets me know that all is right with the world 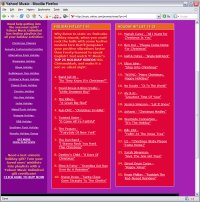 Of the top 10 Christmas videos, Twisted Sister is holding strong at #5 with their version of O Come All Ye Faithful, just behind Run DMC with Christmas in Hollis.

I captured a screen shot of it for posterity. Click the image for a larger version.