pop is an awesome dude

Called Pop. He said to come over since I'm mad. So I'm doing that.

No, I'm not mad about the wedding I went to today. That event was quite lovely even though it rained today. What I'm mad about happened after the wedding, and being that no one really gives a crap about personal crap like that - I'll just leave it at that.

I am going to 7-Eleven, get me some fattening Taquitos, arm myself with a few Monster LO-CARB sodas, and then I'm a-headin' north where I will arrive at Pop's, rot my brain on many hours of bad cable television and then head back tomorrow.

Then I will be better.

Small note: I will be redesigning this site again soon. No, it will not have any drastic changes, but I finally discovered a table-less CSS layout that Internet Exploder Explorer "likes".

-------------------------
I recently wrote about how I upgraded to City Navigator NT version 8 for my Garmin StreetPilot c340. That went thru without a hitch, but when I tried to update my Pop's StreetPilot 2720, the update absolutely would not apply. I kept getting an error message (from the update software, not the StreetPilot itself) that the unlock code was not valid.

I finally got around to calling Garmin and discovered the problem. The serial number on the unit didn't match the unlock code I had for the 2720, and here's why (this is going to be really long but there isn't a short way to describe what happened):

A while back the touch screen on the 2720 failed. So Pop and I took the unit to a local West Marine for repair. I mentioned it in a previous post here. The unit was repaired without issue since it was still within warranty.

What I didn't know is that the entire unit was replaced. I thought it had been repaired, but Garmin decided to use another unit, transfer the data from the old one to the new one (which was very nice), and send it back to Pop. No big deal.

The time comes to order the update DVD, so I get that yellow slip of paper that states the registration code for the 2720 out of its original box, and use that on the my.garmin.com site to order the disc. Anyone who has a SteetPilot knows exactly what I'm talking about. 🙂

You can probably guess what the problem was now, but I'll enlighten you.

The unlock code was for the 2720's original serial number, but since the unit was replaced, the serial number was now different, and therefore the code generated from the my.garmin.com site wouldn't work.

Garmin issued me a new unlock code for the 2720 map update without any problems. I applied the new code into MapSource, tried the update again, and ta-da, about forty minutes later (which is how long it takes since it's a ton of data) the 2720 is now updated to version 8 of City Navigator NT.

I'm writing this here just in case anyone out there with a StreetPilot runs into this issue. The serial number must be accurate in order for an unlock code to work. 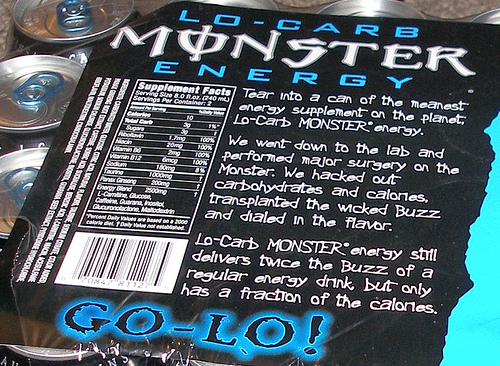 Above is a case of Monster LO-CARB Energy Drink (with one can missing since I'm drinking it now as I write this). I don't drink "LO" because of the lack of carbs. I drink it because it tastes good.

Ever since I started drinking this stuff, I've never been able to figure out what to classify the flavor as - until Pop had a sip of it. After he sipped it, he said Hm. Tastes like grape. He was almost right. Since the color of the soda is gold, it's actually white grape flavored.