Went out for a haircut. After I walked into the haircut place I saw two girls in there. One looked like a linebacker, complete with butch 'do. She could definitely kick my ass. Her girlfriend was a skinny thing with a rat's nest fem-mullet. Both of them looked appeared to be in their late 30's. Possibly 40's.

Decided to put up one of those OKCupid profiles. If you want to join up (it's free).

Contrary to popular belief, it's not a dating-only site. I'm using it for friends. It's a nice alternative to MySpace. If I get a date out of it, great. If not, whatever. And by the way, if you're into those quiz/questionnaire things, OKC is really good for that. The fun-value is way higher than MySpace, no doubt about that.

Anyway, at this point in my life I consider friends more important than having a girlfriend. Actually, let me be more specific. I don't want the dreaded "R"-word (relationship) because I'm just not good at those. But at least I'm man enough to admit it.

Stephanie, a friend from Connecticut that moved to FL shortly after I did, messaged me recently and busted my balls a bit about why I haven't seen her yet. And yeah, I deserved it because we promised each other we'd hook up as soon as she got down here, but now it's been something like over six months and we still haven't done anything. Her and her boyfriend just got a new place and invited me for dinner so that is definitely on my to-do list. 🙂 They live in St. Pete and that place is quite lovely for the most part. Don't really know when I'm going because I have other things on my plate to take care of first (including another dinner I was invited to).

I haven't written a hard rock song in a quite a while. I put together my guitar studio rig just for kicks and recorded something real quick. No drums or bass, just all electric. I call it "Hero" because it's got that fanfare-style sound to it when the triple lead kicks in (heh).

This counts as my first rock song written in Florida.

[edit: all music now on my music page] 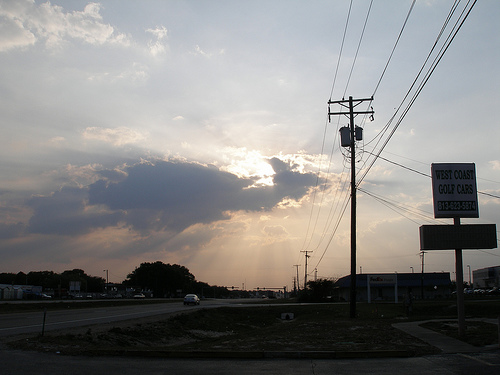 A street close to where I live in Tampa.

Florida trivia of the moment:

In Connecticut I was very used to long sunrises and sunsets. In Florida that doesn't happen. The sun rises and falls fast down this way. The reason is because I'm over 1000 miles closer to the equator of Earth.