My motherboard, hard drive, RAM and video card arrived yesterday. Everything looks good, save for one thing: The power connector off the power supply doesn't fit the motherboard. It's a 20-pin. I need a 24-pin. So I need to head out to a computer place to pick up a 20-to-24 pin adapter. My Intel Core 2 Duo is arriving today anyway, so no big deal.

A friend of mine told me yesterday that modern television sucks. I guess that sometimes you need to be exposed to several hours of television to realize how bad it can be.

You'd be surprised how easy it is to give up television entirely. It's simple: Don't have cable tv. I haven't for over a year. Nowhere in my psyche do I have any television withdrawal, and never have.

One thing I'm very well aware of but don't necessarily pay attention to that often is the sheer amount of advertising in and around Tampa. Whilst driving around yesterday afternoon I looked around a bit and perused the tons of billboards, banners, signs and so on.

I full well understand I live in tourist-ville, but that's what I wanted. I wanted to live in a place that was the opposite of my stomping grounds, and that's what I got.

one out of two ain't bad

Of the two packages I have in transit from NewEgg, one of them is for-sure arriving today. The second? Maybe. I say this because according to the online tracking report, one is in transit to Tampa, the other in transit to Orlando.

One thing I've realized is that I definitely don't have the "Yay! New stuff!" attitude I normally have when I get new tech things of any kind concerning this PC build. I mean, yeah, it will be great to have a fast box. But then I have to install Windows XP, update the crap out of it, then install a ton of apps that I use. That's going to take some time.

Fortunately I have some things taken care of already.

My e-mail is Google Apps powered now, so I don't have to do any of that mail transfer crap. Previously I used Mozilla Thunderbird full time.

I now access all my apps via Launchy. And yeah, I'm totally hooked on that app. Previously I would have to have all my icons in very specific spots. My taskbar was double-high with a huge row of little icons. Put it this way, it went more than half-way across the screen, and I use 1680x1050 resolution. With Launchy there's none of that icon crap. Just type an app, press enter and it launches.

My bookmarks in Firefox are all handled with Foxmarks. All of them are stored and retrieved easily even in brand new Firefox installations, so when I install that browser on my new box, I just use Foxmarks to retrieve everything.

Even with all that in place, there is still so much to transfer over.

I'm probably making way too big of a deal out of this. 😉

rich's DIY tip of the moment 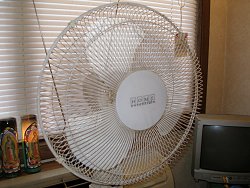 Right: A stand-up fan I've had for about two years. Looks brand new. Why? Because I cleaned it.

One thing about modern stand-up fans is that you can take the whole thing apart easily to clean it. The front grille disconnects via four clips. The plastic fan blades disconnect by turning a center knob (on it is printed which direction to turn to loosen). The rear grille is removed by a small cog behind the fan blades.

All of these removable parts do not require you to physically touch the electric motor whatsoever.

Bring all the parts to the kitchen sink, scrub 'em up, dry 'em up, put 'em all back, and voilá, it looks like new.