As I mentioned in a recent post, my Garmin StreetPilot c340 is still working just fine. However there's one thing with it that bugs me. It has nothing to do with the operation of the unit but rather the way it displays map symbols.

This is what the map symbols look like on the c340:

And this is what one of the map symbols look like close-up:

For some strange reason the map symbol icons are distorted.

This is what the map symbols look like on the c580:

And this is what one of the map symbols look like close-up:

As you can see there's a huge difference. The c340's icons have a skewed/pixelated look while the c580's (that has identical icons) look the way they're supposed to.

Now what's interesting is that the c340's icons didn't always look this way. Somewhere along the line it just decided to skew/pixelate them for no apparent reason.

Things I've done in an attempt to correct this:

None of the above worked.

There's no issue with the way the c340 operates, but I wish I knew what was causing the icon distortion problem. I don't know if the data is corrupted or if there's something I need to reset that I didn't(?)

I delivered sis to TPA earlier today (yes, today) and at the moment she is either on a jet back to Boston or has arrived already.

Pop went to his first ham radio club meeting here in Florida. He said it went well, save for the fact he thinks he was the youngest guy in the room at the meeting. Pop is 73, by the way.

My new betta fish is doing well. I have not named him yet. I think I'll just call him FishFace. Has a nice ring to it. Or maybe Sir FishFace? The possibilities are endless. 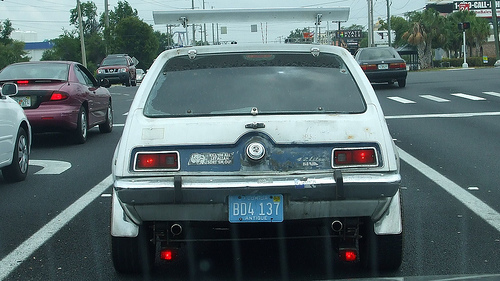 After I picked up my new betta fish today I spotted an AMC Gremlin on the way back, pictured above.

Note the huge wing, lifted suspension, dual exhaust and add-on tail lamps (yes those are additional lamps and not reflectors) under the bumper. The high-mount third tail lamp (also an add-on) didn't work.

I tried to get a photo of the side of the car but couldn't unfortunately.

I posted this photo for the following reasons: