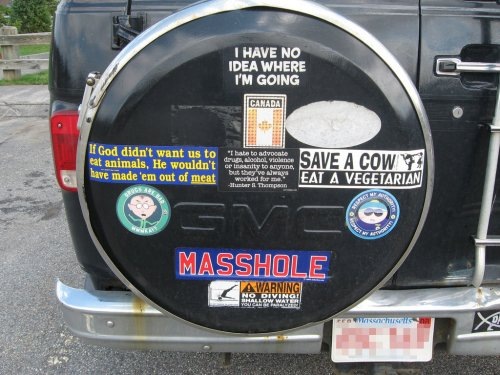 Ganked from this Autoblog article. I really really like the "I have no idea where I'm going" sticker. And the "MA--HOLE" just seals the deal.

Whoever drives this van is cool, I don't care what anyone says. 🙂

As I've been slowly but surely getting the photos over to my Flickr account it further reminds me that I haven't taken too many photos in 2008.

However there's an additional reason I haven't been taking more photos. Gas is just too frickin' expensive. I used to venture out once a week to a place I hadn't been before solely for the purpose of getting some shots. I don't do that now and it's a shame I can't.

When I first arrived in FL in '06 gas was about $2.75 a gallon. This was awesome because it was well over $3.00 a gallon at the stomping grounds, so I was livin' it up and driving everywhere. I could afford it and it wasn't a problem. But now it costs so much that it is a problem.

I can really stretch a tank of gas, don't get me wrong. My truck is darn good as far as mileage is concerned. But in '06 it cost about 50 bucks to fill up my 19-gallon tank. Now it's almost 70 bucks. Big difference.

The thought has crossed my mind concerning other means of getting places, to the tune of a bicycle, scooter or motorcycle.

I see people biking around Tampa all the time; it's a very normal thing. For example, if you want to go to the market to pick a few things up, you strap on a backpack, get on your bike, pick up your stuff, put it in the backpack and head on home.

You can look like the geekiest person on the planet and no one will give you any grief for riding a bike.

The best way to buy a bike is from a bike shop and go used. Several are in Tampa.

If you're willing to put in a little fix-work, a scooter can be had for under $500 easily. Believe it or not most people don't want them because you have to live in a metro to get any real use out of it.

I could purchase one and see almost instant savings from use of it.

HOWEVER - it's not as if you can just buy one and starting scooting around.

It must be street legal, meaning it must have working brake lights, mirrors, headlight and be registered, tagged and insured.

The registration and tagging I don't have a problem with, but the insurance I do. It could very well be that the insurance takes away any (if not all) fuel savings compared to driving a regular car. And remember, you're paying for all this on top of your existing car costs.

It's a common misconception that motorcycles are cheap. Wrong. They can be just as costly as a car and more often than not just as expensive to maintain.

The advantage of a motorcycle is that it can be driven anywhere whereas scooters cannot (they're not permitted on any interstate to the best of my knowledge).

But as any motorcyclist will tell you, you have to have a big set of balls to get on the interstate with one.

I'm what you'd call a courteous motorist, and I give motorcyclists plenty of room when I approach one or one approaches me. These guys are all brave souls. However it's unfortunate that 99% of the other drivers out there don't give any courtesy to a motorcyclist at all. It's wrong and it happens all the time.

Were I to drive a motorcycle I would never, repeat, never take the interstate. Instead I would get a Garmin zumo and take other routes. And in case you're wondering, if you use GPS you do have to get a "motorcycle friendly" unit like the zumo. It has a glove-friendly touchscreen and handlebar mount. Stuff like that is absolutely required.

Aside from all this, I will completely admit that I don't have enough nerve to be a motorcyclist. Some guys are but I'm not and have no shame in admitting that. You have to be of a specific mindset to start riding that way.

After going thru all the options, the motor vehicle is still the best way to get around so it's best to stick with what I have.

All I can hope to happen is that I either start making more money or the price of gas goes down. Preferably both. 🙂

The cam in the video above is $94,700 and does not include the viewfinder or the lens.

To this day, field cameras are ridiculously expensive. Yeah, they do amazing things and yeah, they're worth the money, but notice the cardboard he had to attach just to get rid of sun glare. Also notice the tape to use just to feel his way around it while operating.

It really ticks me off when things like that are not taken into consideration by the manufacturer. It's like they weren't even thinking of the operator when they built it.

Could I do the job this guy does? Probably. But I don't pretend for a second that it's easy. It is very difficult. You've got a director barking in your ear constantly and every shot you make must be perfect. Miss just one shot and you'll be hearing about it for weeks.

An idiot would think "Ha! I could do that job no problem!" No, you couldn't. You'd be fired after the first day.

Back in college I operated a stand-up camera on a large mount in a controlled studio environment, and even that was difficult. This guy is battling all the elements outside and getting an earful every 5 seconds. Easy? You call that easy?