here's what you missed by not subscribing to the newsletter

The first newsletter has officially been mailed out. If you're not on it, here's what you missed:

Podcast update. I said where you'll be able to get them from now on.

A new book I'm working on. Were you on the newsletter you would have known what kind of book it was, and why I'm writing it in the first place.

So in short, if you're not on the newsletter, you missed out on that stuff. If you want to NOT miss out on stuff anymore, get on it.

Want to say thanks first to those who have signed up for the menga.net newsletter. I honestly didn't think hardly anyone would but the turnout was much better than expected. And now the pressure is on to make the first newsletter a good one.. 🙂

Yesterday I picked up my sister from TPA and delivered her to Pop's. The trip was long but uneventful. And hot. It was 90 degrees yesterday. We rode up to Pop's with the A/C on the whole way.

I have not yet done my "degrade" to Windows 7 RC Home Premium edition. This has gotta get done so I don't get stuck with the bill for Ultimate when the RC expires. The reason I haven't done it is because I have everything set the way I want and I really don't want to do the install again, but like I said it has to be done to save a buck. Quite a few bucks, actually. The biggest pain in the ass is backing up all my crap then having to put it all back. Ugh.

Recently I've entertained the idea of setting up an email newsletter, as in not just an RSS feed notifier but something independent of the blog.

I tried several different types of mailing list software. The one which is bundled with my web host provider is very efficient and relatively easy to set up, but a severe pain in the ass to use. It is decidedly old-school. A little too old-school. So that was out.

Another I tried suffered from having way too much crap in it. Installation was easy but setup afterward was just plain awful. There were way too many options to go thru and the whole thing was complicated. We're talking pages and pages of options when all you want to do is just set the thing up and go. But even after I went thru all that crap and performed test mail-out, it didn't work. No mail was ever sent. That ticked me off. I deleted it after that.

Then as luck would have it I found a very simple newsletter program. Installation took minutes. Test mail-out took seconds after that and worked on the first try, so I was happy about that.

At present the newsletter is ready to go, so get on it

After performing a bunch of tests I'm pretty sure it will work okay. Not positive, but pretty sure. 🙂

What will be in it? Stuff that isn't on the site here. Maybe some interesting things like songs I write that won't be public and only in the newsletter. Maybe some freebie wallpapers I make. And some other stuff too.

I plan on mailing out Issue #1 later this week and plan on making this a weekly thing.

Why am I so intent on a self-hosted newsletter?

This is a very geeky/nerdy explanation, so if you really want to know, hit page 2 (and if reading this from RSS, follow thru to the article to read the rest).

Okay, so the deal with me self-hosting my own newsletter goes like this:

First, yes I know there are plenty of free ways to host your own free newsletter elsewhere, such as Yahoo! Groups. But the problem with those is that a company is collecting all the email addresses (including yours) on signup, and that can turn to spam later. And the absolute last thing I want to do is spam anybody. I know that if I self-host my own newsletter, NOBODY will ever be spammed from here. Ever. And I like that.

Second, freebie-hosting your email newsletter elsewhere can lead to this: 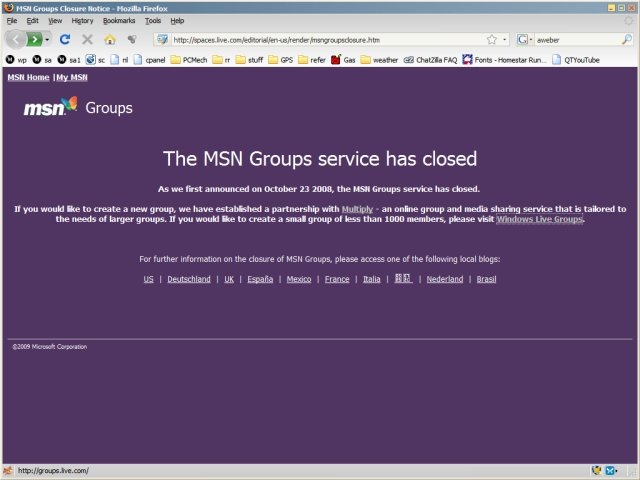 Third, freebie mailing list providers require way too much information from their users just to join. On my list, all that's needed is an email address. That's it. It doesn't ask for your name, age, race, creed, color, location, etc. Just the address.

Fourth, pay-based newsletter services are frickin' expensive. AWeber for example, while a fantastic service, is $19 a month. That's more than I pay for my web hosting service. Yikes. I mean, yeah, if you have thousands of subscribers and are making good money from your newsletter, I can see the justification of the cost. But for a personal one? No way.

Anyway, my little self-hosted solution will work for now. And if it comes to the point where I break 250 subscribers (which I seriously doubt.. but who knows), then and only then would I entertain the idea of going with a pay-based system.