i told you so

Before I moved to Florida, I was aware that sunshine is scientifically proven to make one happier. When you see more sun and feel its warmth more often, you feel better.

And because you probably want to know who was on the bottom of the list on the happiness scale, that would be New York state.

AIM chat, formerly AOL chat, has always been something of an oddity. For a ton of people out there it was the very first live-chat environment they ever used. The only chat older than AIM chat that still exists is IRC - and IRC sucks.

There is a Tampa Bay specific chat room on AIM, so naturally that's where I went. I was happy to see one there. In fact I think AIM is one of the very few chats left that actually has truly local rooms.

What happened when I chatted was typical whenever I get involved in one of these things. Most liked me, a few tolerated me, one outright couldn't stand my presence and blocked me (heh). Par for the course. 🙂

Here's the crazy thing: I actually liked AIM chat. So weird to even say that. It is oh-so rare for me to like chat at all. The only other chat I like is when I do the live tech show I do. Even though that's IRC and IRC is crappy, it's still cool regardless.

The cool part about AIM now is that you can embed chat right on your web site, so I did for the Tampa Bay room. Who knows, you may catch me in there every so often.

It still amazes me the information I can find on the internet. Stuff you think you'd never find out about in a million years.

Periodically I will look up now-vintage information on things. That stuff is interesting to me because it is nothing short of incredible how much old stuff is still out there in regular service.

If you want a real live example of this, look no further than your local automated teller machine, commonly known by its abbreviation, ATM. I can guarantee there's one near you that's at least 20 years old.

Think about that for second.

Do you own anything that's 20 years old you still use? Probably not unless you're older than I am.

So here's the story:

When I was a little kid I used to go to my grandfather's house in Dudley, Massachusetts every Saturday night. My father would drive me there. Sometimes my sister would tag along. I played Intellivision in the living room (and if my sister was there, so would she), my father and grandfather would play cards in the kitchen.

A little up the road from my grandfather's house was a street light - but not just any kind. It was an open-bulb design. The light that shone from it was soft and gold in color, and twinkled somewhat.

There were other regular white closed-shell street lights just up the road a bit, but this one in particular was the only one like this. Every time we passed by it coming or going to my grandfather's house I had to look at it. Nowhere else before or since have I seen a light like that. It was very unique.

I knew even back then as a kid that this light was ancient, and always wondered what type of light that was. I also wondered why I never saw them except for that one in Dudley.

Today I finally found out what type of light it was: A crescent moon claw-shaped incandescent fixture. 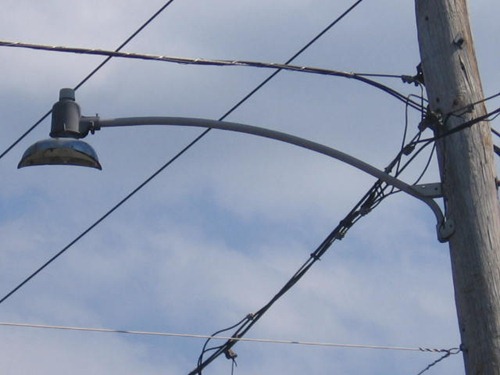 You never saw these on freestanding poles. They were always attached to utility poles using a curved arm.

Here's where it gets crazy:

These were in regular service for about 30 years from the 1940s to the 1960s. A ton of these were in New York City at one point. You can read more about that here.

What really throws me for a loop is that I saw one of these as a kid in the 1980s. That means that light could have already been in service for 40 years at that time.

There are many towns (with a good swath of them in Massachusetts) that use street lamps that haven't been updated since the late 1960s, as in the closed-shell white kind. Sure, the bulbs are replaced when need be, but the poles and fixtures may literally be 40+ years old.

As a kid and all the way into my 20s I do remember those closed-shell whites taking at least a full three minutes to illuminate fully. I had a few friends that had houses relatively close to street lamps like this. We'd be outside talking, it would start getting dark outside and BZZZZZ, on came the light. Really loud suckers. A few minutes later it was at full brightness.

It made me wonder how they would sleep on a cool summer night. It's a nice night, you open the bedroom window and BZZZZZ.. That would bother the crap out of me. 🙂 Maybe it's just something you get used to, who knows.

Well anyway.. I finally found out what the #&%$ that type of light was. It's not that it means anything to anybody, but I was happy to finally get that question answered of "What IS that thing?" 🙂