5 reasons why image titles are bad for your WordPress blog

Image titles are when the titles for your articles are images instead of HTML. This has been around for WordPress for quite a long time, with the most popular (and easy) way to do it being the TTF Titles plugin.

I've messed around with the font-to-image thing in WordPress and have come to the conclusion that it's just a bad idea to use them. This is why:

More people are surfing the web using mobile platforms these days, but unfortunately the web on a smartphone is almost exactly like Web 1.0 used to be. It's slow to load, difficult to navigate, etc. Image titles may look cool, but it will make for loading on a smartphone even slower than usual - and to boot may break the blog's basic functionality on a mobile platform.

2. It will be the first thing to bust on a major WordPress upgrade.

TTF Titles in particular has had a nice long run as something that works for WP, but that won't last forever. The last time it was updated was in 2007. Given that WordPress 3 is right around the corner, it's a good bet TTF Titles will bust when that's released.

3. Slows down the blog even on a fast connection.

With a blog, one of the goals is to get the visitors to the content as quickly as possible. Having image titles slows that down big time.

4. I'm not a commercial designer.

Images titles simply don't do anything worthwhile other than look cool, so at the end of it all, it's best to give it a pass and use better-made CSS instead. Works like a charm, loads fast, works anywhere.

There's this house I drive by every so often that I've been meaning to snap a photo of but always forget to do it.

Google Maps to the rescue on this one. 🙂

You can check out the house here on Google Maps if you like. 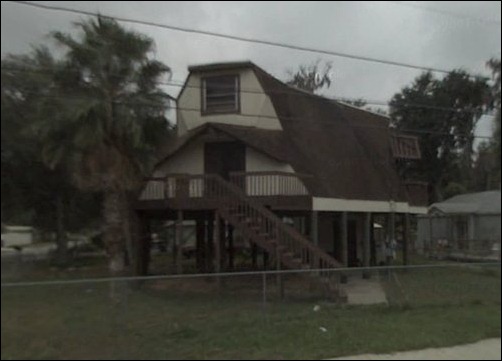 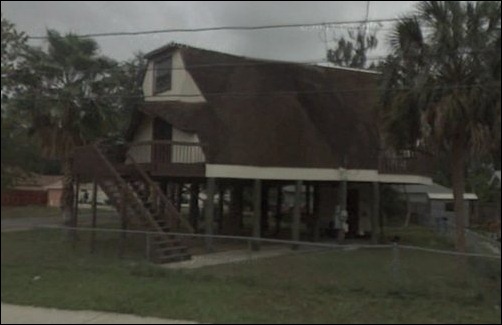 The reason I call this "somewhat" geodesic is because it's raised, not exactly round and the roof has a tri-shape to it. Granted, no geodesic house is completely round, but this one has a lot of angles to it.

The back of the house (which you can navigate to via Google Maps) is oddball as well as it has two porches, one stacked right on top of the other.

Weird house. Cool, but weird. You have to climb a lot of stairs just to get in the front door, but I guarantee whoever owns this place never has a problem with theft/robbery. 🙂

if we treated email like we do texting, email would be a whole lot cooler

Something that those of a texting way like doing a lot is using emoticons. You know the standards, such as:

Eastern country emoticons however they take it to a whole other level. You've probably seen a few of them:

From what I understand, many of these Eastern emoticons are built-in to the cell phones they sell in those countries, and that does make perfect sense considering they'd be a pain to type out.

The reason emoticons on cell phones are so cool is because you're taking plain text and essentially warping it into something else. There are no graphics involved whatsoever. In other words, it's text-based art.

In the way we use email now, the art of text has been completely lost and replaced with HTML formatted crap. Yes, yes.. we have bold/italic/underline, colors and so on, but stuff like that is just too easy. Monospaced characters transformed into art look better, take nothing to transfer and are just plain cooler.

You have to remember that all email was originally like this. Email predates the web by over a decade, and for the longest time people only used non-GUI terminals to read and write their messages. These terminals all used a plain monospaced system font. It didn't matter if you were using MS-DOS or UNIX because it basically all looked the same.

When you're working with a monospaced font, you can do cool stuff with it.

A text-based "image" simply looks more visually interesting be it simple or complex, and that's what makes them cool to begin with. You don't even have to be a computery person to appreciate it.

Reasons why we can't use text-based art in email anymore

Here we have yet another reason on the LONG list of things that make Gmail suck complete ass. The default font in Gmail is formatted sans-serif whether you use formatted text or not. Sure, you could select a monospaced font when composing an email, but for anyone that sends you plain text, guess what happens? Gmail displays plain text using sans-serif.

And anyone that says, "Just send mail using formatted text with a monospaced font" is completely missing the point.

Gmail is horrible for forcing sans-serif, but Outlook is even worse and has been since.. pretty much forever.

What I'm talking about here is not Outlook Express but Outlook, as in the one office people use. As far as I'm aware, that client has always used Word as its default composer and still does. As such, any email sent from Outlook is chock full of garbage code that literally makes the email up to triple the size even for one line of text. I'm not kidding. Back in the day, Outlook was hated because of the junk it put into emails, and is still hated today by quite a few because of it.

See, the deal is that when you receive an HTML formatted email, it's not that big of a deal. But when sent from an Outlook client, it's time for a WTF moment because the way Microsoft does formatting is, simply put, all screwed up. The mail, even if nothing but text with no attachments, is huge for absolutely no reason.

Outlook is the only client I know of that can take 5k of text and turn it into 35k.

The vast majority of people use webmail, and all of them by default compose new mails using formatted text. This should be the exact reverse. Plain text using a monospaced font should be default.

I've always considered emoticons as binary images to be a seriously stupid idea.

Here's a legitimate nitpick I have when it comes to image-based emoticons: It screws up the flow of the way text looks. When you're reading something, the emoticon adds extra space between lines and just annoys you.

The worst offender of emoticons? Gmail, of course. They even have an emoticon that's a pile of crap with animated flies. Oh, you think that's a joke? It isn't.

To think, someone at Google actually made that emoticon and got paid for it.

Google Supervisor: "What innovative thing did you do for Google today, Jenkins?"

Jenkins: "I drew a pile of crap and animated it!"

Image-based emoticons are dumb because it took something that was text-based and cool and made it into something bloated, uncool and altogether worthless.

I do sincerely wish email would go back to plain text. Then we could start using the cool ASCII art again and email would be so, so much better. Truly, it would.