I made the decision to get internet-social again. Yeah, I know I posted that huge "social networking sucks" thing, but I'm finding there are times when I want to post quick little quips that don't warrant the need for a blog post.

This time around I decided to go with the web interface on Twitter instead of using a client. The new UI for Twitter is actually quite good, although if I do find a client I like, I'll go with it. Doubtful I will find one, but hey, who knows.

paper gmail and a wish for printy things 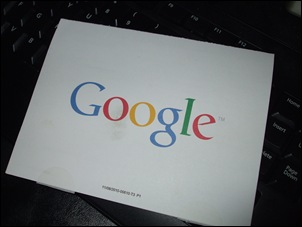 Yesterday in the mail I received a letter from Google. It was from the AdSense team and had some info in it that I need to input into my account for verification purposes. I find it ironic that even though Goog is the #1 web site on the planet with the best of technology at their fingertips, they still use snail mail. Some things are better done on good ol' paper, I suppose. And yes, the letter I received is the one you see at right. It's the back side of it. The other has the postal info, address and whatnot.

It's cool when I receive postal mail from well-established web companies because it makes them seem much more real. You use web sites all the time, but when they actually send you something physical in the mail, you say, "Hey, wow. A real letter. Neat." I mean, yeah, it's not anything special, but I dig it nonetheless.

I remember back in the early days of internet seeing some online companies touting email-to-postal-mail services. They all pretty much thought that the internet was a fad and that nobody would use electronic mail (or electronic communications in general) as their primary means of long-distance communication. How wrong they were. Services like these still exist, such as NetGram and Mail A Letter. It costs 79 cents to a buck to have an email 'converted' and mailed out, postage included. Electronic-to-postal for individual letters isn't that good of a deal, but for bulk mailings (like with Click2Mail,) you can save a bunch.

Something I regret not subscribing to was the print magazine Yahoo! Internet Life. I wish they still printed this, because if they did I'd subscribe. Seriously, I would. Back issues are available on eBay, of course; they're easy to find in perfect condition.

I really think Yahoo! should give another go at a print publication. If not Yahoo!, then Google. Magazines are things people like, and the only reason people aren't more aware of them is because they're simply not promoted. Note that I didn't say "promoted enough." They're not promoted at all.

Let's say Yahoo! struck a deal with a publisher and was able to get Y! Internet Life off the ground again. They should offer a one-year sub for 10 bucks just like Motor Trend does. After everything is all set, slap a prominent link right on the Yahoo! home page.

Would it sell? Yes, of course it would. I firmly believe people would sub to that magazine left and right because it's different and cool - if promoted right. Think of it this way - the last time the magazine existed was in 2002, eight years ago. That's a long time. The sheer amount of people who use internet today obliterates that of what the online population was in '02. It would totally work if the mag came back now.

The only screen saver in Windows 7 64-bit that I actually like is "Ribbons." All the others are terrible and require way too much horsepower just to run a frickin' screen saver.

What would be great but can't do is put the old "Mystify" screen saver in Win7, because the new one sucks, but oh well.

I was however able to get one of those old screen savers from the old Windows into the new, "Starfield Simulation." It may be really simple, but I've always liked it.

What I did is copied the file ssstars.scr out of a Windows 2000 install I have in Virtualbox on to my Win7 64 desktop, then right-clicked it, Install, and ta-da, I've got my "Starfield Simulation" back!