I've found that by adding super, ultra, mega or extreme to any noun will end up in something described as awesome, tacky, funny, dangerous, weird or really disgusting.

how my new design works with old windows

Like anyone else who designs a template for a web site, IE is just plain evil. Specifically, any IE under version 8.

Out of the gate I knew that some parts of my site wouldn't work correctly in older Windows with older IEs. Fortunately however it doesn't make the site unreadable.

I have old versions of Windows loaded in virtual sessions for nostalgic reasons, but I also use them to test out new versions of my site. My test is pretty basic. If the site can be viewed in Windows 2000 using IE6 @ 1024x768 resolution, I know it will work anywhere even if it looks like ass.

For you old Windows nostalgia buffs out there, you'll probably get a kick out of this concerning what works, what sorta/kinda works and what doesn't work at all.

Each image below can be clicked to view full-size.

How do you make a web site that works on every browser even on ancient computers/OSes?

This is not impossible to do even in today's internet. You have to make something that uses no CSS, tables for formatting, no Flash, very light JavaScript (none, if possible) and only use GIF and JPG images.

There are sites like this that are exactly like that. Drudge Report is one of them and it gets craploads of traffic. 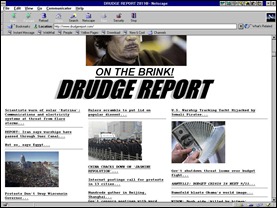 I would do this save for the fact I need scripting for the Facebook sidebar to work and I periodically embed videos that also need scripting.

Decided to change around my theme again. The layout is the same but the logo and color scheme are different. The logo is a standard Helvetica with a radial-blurred background and the color scheme has cyans and blues in it. Works well for the most part.

missed by a month

I found this seriously cool vinyl record store that was actually pretty close to me called Vinyl Fever Tampa, but they just closed. And yeah I mean just closed, as in just over a month ago. What adds insult to injury is that the reviews for the place said it was awesome and nobody ever complained about the shop. Knowledgeable staff, insanely good selection, the works. All gone.