all those little bots...

The big news with spam prevention right now is that Microsoft did some major ass-kicking in killing off a huge chunk of worldwide spam; this was done by busting the super-huge botnet called Rustock.

Recently I fired up my ICQ client after not having done so in a while. As I was doing my work with my blogging and whatnot, I noticed something, or rather a lack of something - the ICQ client was silent. There were no spammy buddy requests coming in - and I always get those. But they shockingly haven't been happening at all.

Is this a result of Rustock getting killed off? I'm pretty sure it is, because spam obviously isn't limited to just email, and I'm pretty sure the ICQ admins didn't have some miraculous new spam-prevention technique implemented that magically killed ICQ spam overnight.

I've been using ICQ a long time, and I seriously never thought I'd see the day where the spam on ICQ would just... end. It's weird that the ICQ spam isn't there - BUT I'M NOT COMPLAINING. 🙂 Hopefully spam-free ICQ will last for a good long while. 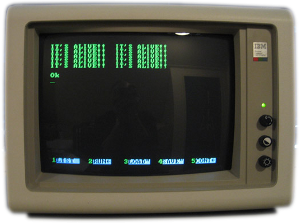 I've always wanted to try a text-only way of doing email because it reminds me of how I used to do BBS mail back in the early 1990s. This is a totally do-able thing since email is nothing but text, however getting it to work with modern home computing isn't the easiest thing in the world.

The text mail client with the largest following is Mutt. In Windows this is run via Cygwin. I tried using Mutt but hated it because the setup was just too complicated. If you can make sense of this, then by all means, go for it. I couldn't. Do I lose geek points for this? Yes, but I don't care.

Another text client with a good following is Alpine, which is the the successor to Pine. Alpine is the one I was able to get working. It is, admittedly, annoying to set up. Not so much as Mutt, but still annoying. Connecting to the inbox is fairly straightforward, but when it comes to the outgoing server and other IMAP folders, that can be trying on the nerves. Once it's all working however, Alpine does the job in fine style.

After I was able to get Alpine working, it surprised me that I actually really like doing mail this way. It is nothing short of awesome that I can do mail in a way where there is zero fluff anywhere. Alpine is smart enough to where I can read both text and HTML formatted mail easily, do simple things like move messages to/from folders, attach files if I want, flag messages (which modern mail calls "starring") and so on.

Here's some more coolness - I can make my mail look as if it were on a Nintendo using the Press Start font. When installed, the font is available via Config/Set Window Font in Alpine: 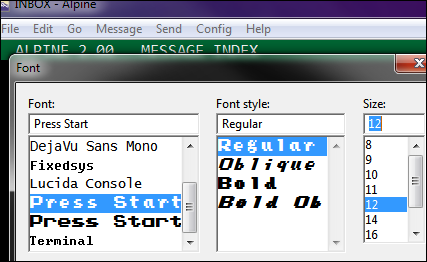 And yes, all the colors can be changed around to suit: 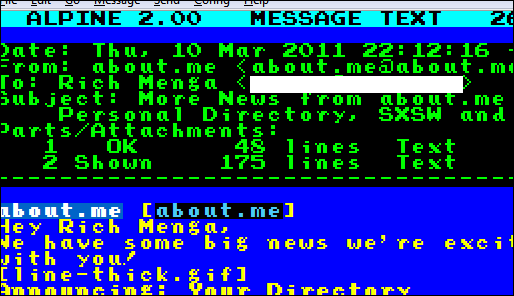 Seriously, how awesome is that?

The communications I receive there have been all positive, and that is a complete 180 from the feedback I received on YouTube.

I've said before that YouTube has the worst community on the internet, and my opinion on that hasn't changed. I still have all comments and voting off on my music videos there and it's going to stay that way because FB fan page interaction is 100% better in every way.

YouTube community feedback can be described in one word: Garbage. And you would not believe the amount of garbage I received in my inbox on a daily basis when I had comments enabled on YouTube.

Facebook community feedback on the other hand has been great. This is due to three reasons. First, the bulk of users use their real name. Second, Facebookers genuinely value their accounts - meaning it's in their best interest not to act like morons else they'll lose their account. Third, there is no way to 'downvote'/dislike anything on the system. All of this is good stuff.

The best part however is that community truly means community on FB. The system is designed in such a way where meaningful communication and sharing of things like photos, links and so on actually matter. YouTube never had that and most likely never will.

Are my days on YouTube numbered? I plan them to be. Right now I have 1,015 subscribers on my YouTube channel. If (or should I say when?) my FB fan page fans surpasses the number of subs I have on YouTube, I won't post videos there anymore; I'll create a 'farewell'-ish video and inform the masses that if they want to see my new content, go to the FB fan page. Heck, I might even kick start this by purposely only posting teaser vids on YouTube that point to the full vids on FB to ramp up the fan count.

When the time comes that I can dump YouTube, I'll be a very happy man.