Some additional notes to the vlog seen above.

In the vlog I mentioned there's a new guitar coming and also talked about a watch I recently acquired. I'll talk about the watch first. 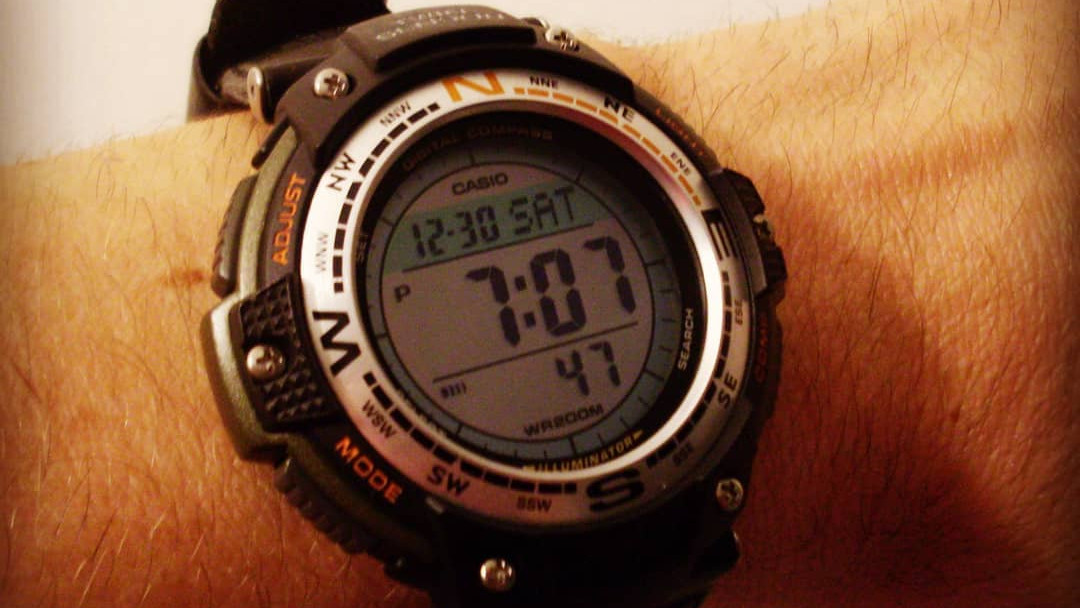 For several years now I've been on the hunt for a daily wearer watch that does everything I want it to do for a long time now. Every time I think I found one, it ends up having something missing and/or having an annoyance or two about it that makes it not The One.

This watch, I believe, is The One. Or more specifically, The One for me. It has a fabric strap that doesn't irritate my wrist nor pull hair whatsoever. It is small-wrist friendly. It has 5 alarms, countdown timer with auto-repeat (I've found that having auto-repeat is something I absolutely require,) easy-to-read display, a weight that's light, full time/weekday/month/day display on the face, ability to adjust settings scrolling forward or backward, and beep tones can be silenced.

Is it perfect? No, but for me this is as good as it gets. In the complaint department, the night light could be a little bit better, the case could be a little bit thinner (it's 13mm thick,) the buttons could be a just a tad easier to press and the strap could be just a few millimeters shorter. HOWEVER, again, for me there is no better I could find no matter how much I search. The positives of this timepiece greatly outweigh the negatives, which are nitpicks at best.

I will have a full review of this watch with video soon.

This is the new guitar I will be receiving a few days after I post this. I don't have it yet. It's on order.

This will be the first HH guitar I've bought since the Squier Bullet HH. Yes, I've said humbuckers suck before and I don't deny that. But this Telecaster was too good to pass up. I traded out another Fender guitar I owned for it (the story of that guitar I will tell at another time,) and if this Telecaster ends up being good, I'll keep it.

Here's a quick list of things to know about it.

Not a rehashed Blacktop

This looks similar to a Fender Telecaster Blacktop HH but differs in several ways.

This guitar has a 21-fret neck, "transition" Fender logo, standard orientation control panel with traditional Telecaster knobs and pickup rings for both pickups.

Not the same as the Fender Telecaster Standard HH

The Standard HH has two open-coil humbuckers that can be split, and only comes with a pau ferro wood material fingerboard. No all-maple neck option is offered. The 3 colors offered are Black, Olympic White and Ghost Silver.

The guitar I'm getting has two chrome cover humbuckers with no splitting ability and has a 1-piece maple neck. The only color offered is Sea Foam Pearl.

Both guitars share the same tuners, bridge and body with "gut cut" in the rear, but that's where the similarities end.

How the pickups actually sound will be interesting

The pickups are described as "slightly thicker, deeper voice than usual, while retaining authentic Fender note clarity and articulation."

I have absolutely no idea what any of that means. I don't know whether that indicates high-output, low-output, Fender Wide Range style voicing or something else entirely.

I also don't know the potentiometer resistance used for the volume control. 250K? 300K? 500K? Not a clue. And there is no documentation anywhere saying what it is.

It will be a bit of an adventure hearing what this guitar sounds like plugged in.

I do not know if I will like this guitar or not. Hopefully when it arrives at Guitar Center (I will be picking it up in-store,) the guitar will be in good shape, not damaged, not messed up in any way and good enough to take home.

If it goes home with me, that's when I can do a full review on it.

If it doesn't go home with me, I'll be sure to say here why I didn't.