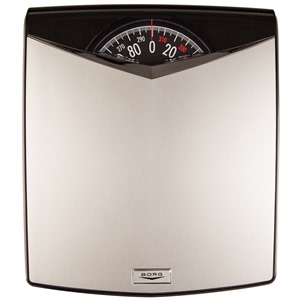 I use a digital scale, but am considering getting the one shown above for two reasons. First, it's mechanical, and those aren't exactly easy to find these days. Second, it's made by a company called BORG. Resistance is futile. But in all seriousness, the mechanical scale is always the better option because it's more accurate, and having to replace a battery in a scale for weighing yourself is just stupid. Mechanical is definitely the way to go. It might cost slightly more, but again, no batteries required. Ever.

I'm getting really close to the point now where I will have to buy new jeans. I was at a 38-inch waist size. I can easily fit into 36-inch now, but instead of buying new jeans, I decided to get a new belt instead and hold off, because in all honesty, I may slim down to a 34-inch waist. My goal is to be between 155 and 160 pounds. While I seriously doubt 34-inch will fit on me at that weight, it's better to be safe than sorry. I'm not about to go and spend cash on new jeans only to run into the clown pants issue again.

In other words, I won't know whether a 34-inch or 36-inch waist size is correct until I'm all the way down to my target weight. Once I'm there, I can then go try on those sizes and see what actually fits.

It's not a miracle

I've been reading a lot of articles, posts, comments and whatnot about how losing this kind of weight in the time I did it is "miraculous."

There is no magic to what I did. All it required is not eating filth and light exercise. That and a rice cooker with a top tray steamer, which makes for stupidly easy steamed veggies.

I believe there are two keys to true weight loss. Understanding what filth food is and what it isn't, and the understanding that losing weight is not a hard thing to do.

I know more about food now than I ever did before. It's not just about reading labels, but also understanding what's printed on that label.

For example, Diet Coke along with many, many other sodas contains phosphoric acid. Do you know what that is? Maybe you should find out. And bear in mind that's just one ingredient.

However, all the learning of ingredients doesn't mean a damned thing if one has that whole "dieting is hard" mode of thought stuck in the head.

Dieting is only difficult to those who are addicted to filth. There is no such thing as a food addict. There are only filth addicts, as in those who are totally addicted to massive amounts of anything that's sugary, salty, cheesy or all three, and get fat. You cut out the filth, and you will lose weight.

Those who are addicted to filth will ultimately suffer from a very low quality of life. It's not about whether the skinny or the fat person lives longer, but rather about who gets to enjoy life more. Fat people have crappy lives and that's just the way it is because their fatness literally makes them sick. There is no such thing as a fat-and-healthy person; anyone who thinks otherwise is delusional.

How hard is it to break the addiction to filth? Not hard at all because it's all in the mind. Filth addicts choose to eat filth. Breaking the filth addiction is easy. Don't eat filth.

I chose to eat filth for a long time, and nobody forced me to do it. I then chose not to eat filth, and the weight came off. Simple as that.

Adjustments (still) being made

When you get into a filth food routine, and then stop eating the junk, adjustments are required.

For example, I would almost always buy soda, snacks or both at a convenience store whenever I stopped at one for gas. I just felt that I had to buy some junk while I was there. My thought was, "Well, as long as I'm here, I might as well buy something...", and proceeded to buy junk and consume it.

Stupid? Yes. Very stupid. I wasn't hungry at all. I had fallen into a bad routine that whenever I'm there, I had to get something for no reason other than to get something.

The adjustment is coming to the realization of, "Oh, right... I'm not hungry and I don't have to buy a bag of Doritos while here at the convenience store because I really don't want that salty, nasty bag of crap."

Other than making the adjustments of not being in a filth food routine (one of several) anymore, things have been going well. 🙂