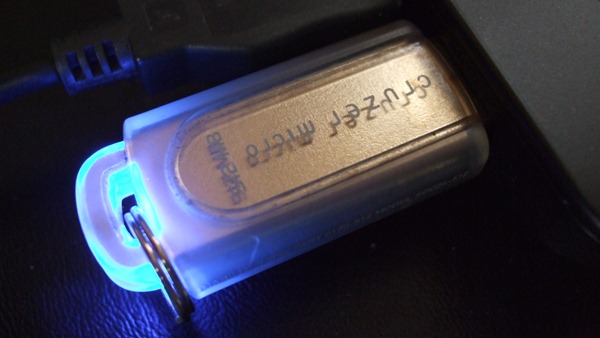 Above is a USB stick I own solely because it has a cool blue light on it when in use, the Sandisk Cruzer micro. It's really old, and has a maximum capacity of 512 MB, and I think I might chuck it soon. More on that in a moment.

Yes, that's 512 megabytes and not gigabytes.

There is very little use today for one of these things, save for one. On older PCs and laptops (and I mean really old, as in USB 1.1 and not even 2.0), many of those will not recognize a USB stick that's over 1GB in capacity. So if you've got one of those old pre-1GHz laptops, chances are its USB port is only 1.1 compliant, and chances also are you'll need that 1GB-or-lower USB stick just so it recognizes in that old laptop when trying to transfer files over to one without using a network.

I found this stick kicking around recently, connected it to my laptop and it started right up, but then suddenly disconnected. So I took it out, reconnected, low-level formatted it, slow-formatted it, and did a test write of about 70MB of data to see if this thing would still actually work.

It did work. Sort of. During the file copy there was one little file that absolutely would not copy over, and yeah, that means this stick is very close to the end of its lifespan, so it's definitely going to get chucked.

Two things to know before continuing:

What's the only thing that makes a USB stick worth having?

The fact it works in so many hubs.

While true the the 128GB SD card exists (which I'm sure will be followed by the 256GB before the end of this year), none of us use just one SD card for everything. That being said, the problem with SD cards is that you can't find a "card hub" for them. Seriously, try to find one that you can buy right now. And to be specific: I'm not talking about a card reader, but rather a card hub, as in something where you can plug in multiple SD cards at the same time, just as you would USB sticks on a USB hub.

Does the card hub exist? Yes. But good luck finding one.

If we had proper SD card hubs, we probably wouldn't use USB sticks at all

The fact USB sticks go into hubs so easily that makes them worth having, but if we could get our hands on card hubs, I'm sure most of us (myself included) would dump USB sticks without even thinking about it.

Other than the hub thing, the only other real advantage of USB stick is the fact you can hang one on a keychain; you can see this in the photo above; this is why USB sticks are sometimes called "keys".

But do you hang a USB key off a keychain or around your neck with a lanyard? I don't.

On a final note, what's the largest-capacity USB stick you can buy right now? The answer is 256GB. Yep, the USB stick actually one-ups the SD card by being first to 256GB-Land. The cost? Click the link and find out. And bear in mind I picked the cheaper one. 🙂

Actually, this is the final note: Yes, USB 3.0 sticks are fast on data transfer rate, but SD will quickly catch up once UHS-II specification (Ultra-High-Speed) is released - and that may happen this year. SD is at UHS-I now, and II is right around the corner.