Back when the skies were a lot friendlier 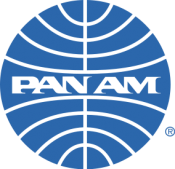 There are times when everybody says at one point or another, "Geez, I was born in the wrong generation!" This is one of those times.

Recently I came across the web site LOGO R.I.P. It's a small collection of large company logos that are no longer used; one of them is Pan American World Airways. This airline company is only known to those that flew a lot prior to the 1990s, because Pan Am folded in 1991.

LOGO R.I.P.'s "condolences" page on Pan Am is nothing short of amazing, and makes me really wish I had flown that airline back when they were hopping with business in the 1960s. Here's a few quotes from that page:

Gone but not forgotten! I spent the most wonderful 18 years of my life while working for PanAm. It was the best civil aviation school that I have ever attended. It was an honor to work for PanAm. ''You can't Beat The Experience'' slogan of PanAm proved it ! ''The Blue Globe will always remain in my heart and soul.

It was the best aviation school in the airline industry. I miss PanAm very much and I pray that one day a miracle will happen and there will be PanAm again. We the PanAm people used to say the color of the blood in our veins was blue! PanAm is a Legend.

I grew up in Miami, FL where PanAm had their beautiful amphibias port and repair facility, My neighbor told srories of wearing roller skates while chaseing parts in the huge warehouses in Coconut Grove. PanAm gave sleepy Miami it's first taste of cosmopolitan glamour and site of the "blue globe" will always serve up a special warm-and-fuzzy felling to this Miami native.

When you flew Pan Am, you were truly in for a real treat because it was a fantastic airline. Why? Because the employees genuinely enjoyed working there. Stories like the above are the type you simply cannot buy; they only come from those who truly had pride in their jobs.

And when's the last time you heard anybody describing pride in their job working at any modern airline? Probably never.

Pan Am, by the way, is a Florida original; it started in Key West. At their peak they were the flag carrier for the United States as a nation.

The way Pan Am ended was absolutely horrific. 7,500 jobs were lost. In the Miami area, 9,000 were lost when you combined both the in-airline and all the other jobs that depended on the airline's existence. A whole ton of former employees then sued the corporation after that. The whole thing was just a nightmare.

Why did Pan Am fold? It was more or less a classic example of the left hand not knowing what the right hand is doing. Corporate mismanagement was all too obvious, no one seemed to care about what was going on within the organization, the US government paid a blind eye to its own flag carrier, and so everyone rode it out until the company simply imploded.

Aside from the whole folding debacle, I truly would have enjoyed flying Pan Am in the 60s or very-early 70s. It was a time when flying was very affordable, so traveling abroad via Pan Am was truly a great way to get to your destination. In addition, the people who worked for the airline truly wanted to be there, and it showed.

Pan Am still exists, but not as an airline. It's now Pan Am Railways - and they even still use the old logo!

But that logo sure looked better on a Boeing.

More cool Pan Am stuff can be found at PanAmAir.org.