What is the guitar I miss the most?

You guessed it, it's Banana.

2011 was the year when I started buying guitars again. That was the year I bought the Squier Bullet Strat I nicknamed Banana, and out of all guitars I've ever parted with, that's the one I miss the most.

Fortunately, I recorded a video of me playing Banana the day I got it (seen above), February 1, 2011. If I remember correctly, I bought it from Guitar Center in Tampa Florida and the price was $119. I needed something cheap and new, I wanted a Strat at the time, Squier had one in this totally cool banana yellow color (they called it Arctic White, but seriously, it's yellow), so I bought it.

Less than a month after owning it, one of the dot inlays fell into the fretboard. Fixed under warranty. The guitar worked fine after that up until I traded it out years later.

Before I say why I miss this guitar the most, I'll say what I don't miss about it.

And this is what I do miss about it:

Do I want it back?

The guitar always looked cool and at this point is considered a "classic Squier" since Squier doesn't make a Strat like that anymore. The closest equivalent is the Bullet HT model, but it's not the same Asian make as the original was. No trem, a skunk stripe present in the rear, different headstock logo, and even worse tuners than before (which is saying something since the originals were pretty crappy). And, obviously, the fretboard material is no longer rosewood.

In other words, I can't get back what I had with a new one, so I'd have to go old.

I think the only way I'd ever play one again is if someone found a similar guitar in a thrift shop or guitar store for absolute dirt cheap and sent it my way.

Fortunately, I did take a photo of the serial. This is what it looked like: 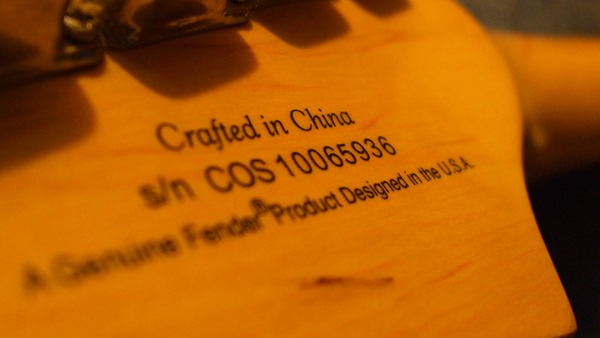 The COS10 means it was a 2010 build. No, I am not looking for the exact guitar I traded out because the frets were wrecked on it. But if someone out there actually finds a '10 Bullet Strat in good shape and wants to send it my way, yes I would be more than happy to play it.

If anyone out there is crazy enough to send me one of these (sometimes I have to be careful with what I say on my site, because some of you may be nuts enough to do this), I only have these requirements:

The guitar doesn't have to be yellow. It could be red, black, blue, whatever. I also don't care if it's dinged up or missing the tremolo arm.

The front of the headstock had a flat black Squier logo with "by Fender" under it and  "Bullet Strat" after the logo. The truss rod location had no paint on it and there were 2 string trees: 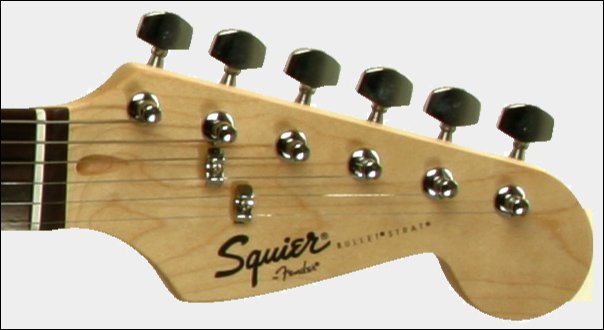 Is this guitar a collectible?

Not in the slightest. This guitar, at best, is only worth maybe 50 bucks. And that's being generous. I'm probably the only guy on the planet who would actually want one again.

I'm only mentioning these specifics just in case someone spots one and is willing to send my way.

When I think back on all the guitars I've owned in the past, this is the one I had the most fun with.

Yes, it was a noisy mess. But it had the right look, right sound and right feel.

In my earlier days of YouTube, this was the guitar I did a ton of videos with.

If I never get this guitar again, that's fine. But if I did, that would be cool.