Considering I still have the same Intel Core 2 Duo as before, that's a fairly hefty jump in the positive direction for my "Windows Experience Index." According to Windows Help, the lowest score is 1.0 and highest 7.9. My score of 4.4 indicates I'm now in the upper 50% instead of the lower. Like I said, big jump.

The build was successful, as was the OS installation - but not without a few stumbles. The biggest one was getting Win 7 Upgrade to install without requiring a preexisting XP installation. After some searching through forums I was able to acquire the info I needed. After that everything installed as it should.

Over the course of the next few days/weeks/whatever I'll be transferring stuff from my old hard drive to the new one.

My only concern is the power supply. It does have thin steel and that bothers me. However it is working fine, so.. we'll see how that pans out. 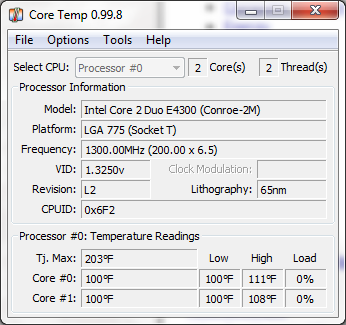 No, my proc isn't 1.3GHz, it's 1.8 - the clock speed is what was recorded at the time I took the screen shot. It varies depending on load.

From what I gather, 120 degrees is normal and 150 or above is hot. I max out at around 120, meaning my box is running much cooler. In fact, this is the coolest my computer has ever run, so my goal of getting the heat down was definitely successful.

In addition, the average load is the lowest I've ever seen. The 8GB RAM I have has a lot to do with that. That and the 64-bit architecture.

Hopefully I should be well set for a while now. 🙂