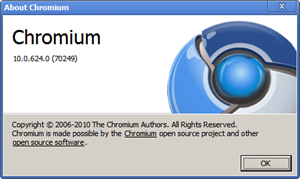 I'm probably going to write up a work article for this but wanted to write it here first just to give you the poop on what this is all about.

The worst part about the Google Chrome browser is how creepy it is. It injects a GoogleUpdate.exe into your Windows startup behind your back, and you would never know this unless you actually dug deep and looked. This is how Chrome always stays updated. While users of this browser consider that a good thing, I don't. Software should not install behind-your-back crap like that and furthermore whenever it wants to update itself, it should tell you. Chrome doesn't, never has and probably never will.

I should note that if this were any browser but one made by Google, the internet community would kill it instantly. If Microsoft, Apple or Mozilla tried this, OH MY GOD WOULD PEOPLE BE UPSET. Google somehow magically gets away with it and I've never understood why.

A trunk build of Chromium has no Google'ized auto-update crap in it whatsoever, thank God. It's smaller and can even be downloaded as a ZIP and run without any installer if you choose to go that way.

I decided to give this a go because I don't want Goog's meat hooks doing stuff behind my back on my own computer. What I discovered was rather cool.

Chromium beats the crap out of Chrome, speed-wise. It is version 10 of the browser and wow does it zoom along nicely. When you first start using it you'll say, whoa.. this frickin' thing is fast. It is, believe me. I liked it so much that I dumped Chrome completely and am running Chromium instead.

Everything, repeat, everything in Chromium 10 is better and faster than Chrome 8. If this is where the browser is going, that's great because it's a solid build. I just wish there were something in Chrome that was a little checkbox that said "notify me when an update is available and ASK ME before downloading", but that unfortunately will never happen.

I'm okay with checking for new trunk builds on my own to keep that stupid auto-update crap out of my Windows. Like I said, if Chrome were more 'polite' about it rather than just sneaking around doing everything in the background, I wouldn't be so vocal about it.

This is how Firefox does it: 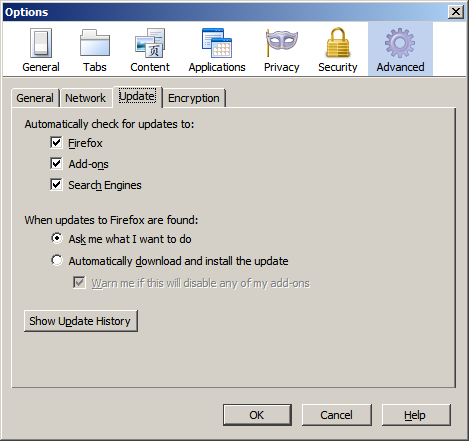 Why can't Chrome do this? Is it that much of a bother to give the end user manual control of how much auto-involvement they want in updating software?