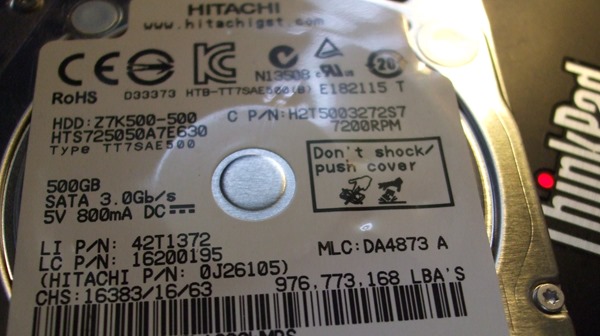 I had a hard drive almost die on me last weekend.

Windows 7 tells me there's a problem with my hard drive, so I do a drive image backup to an external HDD I have. Then I power down the laptop, flip it over, take out the old drive (pictured above), pop in a temporary drive out of another slow-ass-but-usable laptop I have, put the thing back together, sent the drive image to that drive, booted up, everything is A-OK and I lost no data.

I have a new laptop hard drive on order. This one. It's 60 bucks I didn't want to spend, but I use my ThinkPad a lot, so it was necessary. The temporary HDD I'm using is definitely temporary, because the original was a 7200 RPM and the temporary is a 5400 RPM. That, and the temporary drive is a bit older and on the tired side, so it would be a bad idea to use it full-time. In other words, it's good enough to use until the replacement drive arrives.

Was Windows 7 right about the old drive being screwed up?

Well, when I went to wipe the drive with DBAN later on, about 35% of the way through the process, things started getting slow. Then slower. Then slower. Then crawl speed. Then DBAN says the wipe, which was just a quick-erase single-pass wipe by the way, would take 8 hours to complete.

I let DBAN sit there for a while, probably around a half-hour, then came back later to see if it speeded up at all after going over the bad sectors. Nope. It was only getting worse... and even slower than crawl speed.

At that point I pretty much knew that old drive was toast and stopped the wipe process. Later on I'll just open that HDD, snap the platters (the only way to truly destroy hard drive data) and toss it.

Windows was right. That drive was about to have a major failure.

Windows 7 saved my ass. It really did.