crunchbang linux (or how to waste time on a friday night) 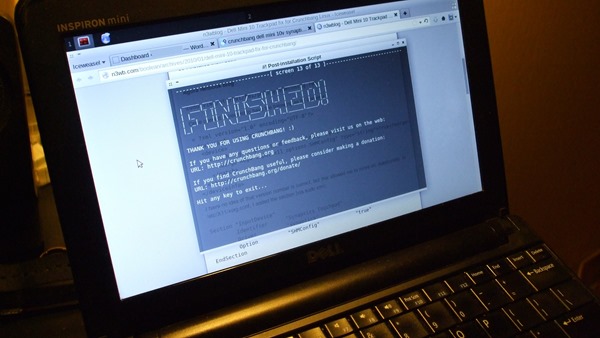 On Friday night I installed Crunchbang Linux 11 "Waldorf" on my Dell mini 10v. That was a huge pain in the ass to get done, but I got it working right.

Before I go into why Crunchbang is great and that I will probably stick with it, it is not easy getting that OS installed on a mini 10v with a 1024x576 resolution. What happens is that "live" mode works fine, but the installer doesn't. If you attempt to use the installer, the screen goes black, some weird colors appear at the top of the screen and you're basically stuck.

For anyone that owns a mini 10v, this is how to get Crunchbang installed on that crappy little netbook:

So why did I go through this hassle to use Crunchbang? Well, that's where the good part comes in.

My crappy netbook, while crappy (only a 160GB HDD and 1GB RAM), is still a functional computer. Computer geeks know that a netbook can in fact be used for a good while longer yet if the right operating system is installed on it. And for that, Linux is required.

The only way to make a netbook run tolerably with Windows is to use a very, very slimmed down XP with Service Pack 2. You can't even go to SP3 because it's just too damned slow. It's required to only use SP2, turn off every possible service you can, disable all updates and run no anti-virus just so the thing runs at a tolerable speed. And I did that for a while.

We're almost at the point where newer software won't offer XP as a supported OS. This is going to happen real soon, starting with major web browsers.

So as for why I dumped XP and went with Crunchbang on the 10v, it was specifically because it runs faster and supports modern software.

Crunchbang is the best OS you could put on a crappy netbook. It looks and operates the best out of any lightweight distro out there. And the wireless usually works on the first try. The desktop environment is Openbox. Not good for newbies, but just fine for seasoned computer users. And yes, Openbox is a huge reason why Crunchbang runs as fast as it does, because it uses next to nothing for memory usage.

My third reason for giving Linux another go...

...is to beat the planned obsolescence curve.

I estimate that Win7 will be fairly unusable by around 2018 (Windows 10 should be around by that time). The electronics market wants all PCs to die (and they are) along with all laptops running desktop OSes, and wants everyone to switch to f--k-all crappy mobile OSes. Why? Money, of course. A mobile OS by nature is crippled on purpose, and for companies is a total cash cow because of those crappy little apps for sale. A lot of people buy them, too.

Linux distros, especially for those like Crunchbang, go in the exact opposite direction. A lightweight distro's goal is to keep older hardware running. There's no stupid app store in there. Nothing to sign up for. No hocking of any "cloud" crapola. It's just an OS with access to a ton of apps - all free - that allows you to use your computer for as long as possible without paying a penny extra for it.

Over the years there have been many that have asked, "What's the killer app in Linux?", in reference to that one magical program that makes everyone want it. No such app exists for Linux, because Linux itself is the killer app...

...but that's not to say Linux distros are perfect. Far from it. Most are seriously crappy.

Crunchbang, however, is the first Linux distro I've used in a very long time that I actually like.

If I get along with it well enough, this will allow me to skirt Win7's planned obsolescence altogether well before it happens.

I'm not running Linux on the netbook to be "cool" or to stick it to Microsoft or have nerdy bragging rights or any of that other nonsense, because nobody cares about that. I'm running it because XP is close to being on death's door and it granted a new lease on life to my crappy-but-usable netbook. I'm also running it to get the jump on learning Linux desktop environments now, so when the time comes that Win7 is on death's door, it won't be a problem switching over to an OS that acts like a desktop OS is supposed to act like.