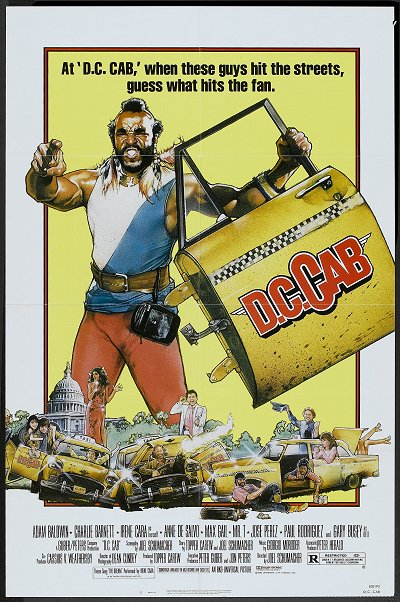 D.C. Cab is yet another one of those movies I saw when I was a little kid, had absolutely no idea what it was about, saw that it was on Netflix and watched it.

Glad I did, because it's funny - and for me seriously nostalgic.

To get this out of the way up front, this is your typical 1980s almost-no-plot comedy movie. The comedy is similar in style to Police Academy; that's what you can expect from this.

The cast of this movie is a group of actors you would NEVER expect to be in the same film together, including Mr. T, Gary Busey, Bill Maher (yes, that Bill Maher), Paul Rodriguez, and Adam Baldwin among others. Heck, even Irene Cara appears in this movie for a few minutes.

I was happy to watch this movie again for both old and new reasons.

For the old reasons, first I was glad as an adult to see what this movie was actually about. Second, I like seeing cars at a time when gas was really cheap and people just beat the crap out of them and didn't care. Cars in this movie had real steel bumpers, got knocked around a lot and of course it was cool seeing all those real-deal Checker cabs. Third, it was really cool seeing a bunch of TV stars and comedians from the 80s I remembered in a movie.

For the new reasons, the first thing I noticed about this movie is how well it was shot. For whatever reason the color is amazing. I don't know what film tech was used to shoot D.C. Cab, but all the colors popped out in a really good way and is much better than most early-80s movies - even the good ones. The audio was well-mixed as well. I'll put it this way: The shots are done so well that in driving scenes you can easily see the outline and even the textures of the headlight lenses.

The only bad thing was that yeah, this flick made me feel old because the film was made just shy of 30 years ago. It's getting to the point in my life now where several movies I remember watching as a kid are past the quarter-century mark in age now. Films like Ghostbusters, Ferris Bueller's Day Off, Back to the Future, the aforementioned Police Academy, and so on.. all those films are over 25 years old.

D.C. Cab is R-rated and I didn't see it in the theater originally in '83 (I was only 8 years old then). What I do remember is renting it. I saw Mr. T on the cover, figured it was a funny flick to rent and so either I rented it and the clerk at the rental store didn't care I was renting an R-rated movie, or my dad rented it for me if I asked him to. There were certain movies I'd rent just to watch by myself because I knew nobody in the family would be interested in them except me, and this movie was one of those.

The only reason this movie got the R rating was because there's breasts in it and one scene where a naked stripper runs out in the street. And yeah there's a few scenes where the ni**er word is used.. but just barely. Had it not been for the less-than-a-minute screen time combined of breasts and the even-less-screen-time of the ni**er word, this flick would have got a PG rating fairly easily. I'm thinking the director purposely put the breasts and barely-there n-word to get the R rating thinking it would sell the movie better. He was probably right.

I was glad to rewatch this. Netflix is awesome. 🙂