Time for a diet update.

I recently rediscovered Sno-Caps. And they're frickin' delicious. But they can be a bit difficult to come by. Locally, I can find them at Walgreen's and only at Walgreen's. But in other parts of the USA they're available at Walmart or Target or wherever. I know the reason why this is. Sno-Caps are only available in what are called concession boxes, which basically means candies you only find at movie theaters. As such, they can be somewhat tough to find as they're not stocked in convenience stores, so you have to go looking in department stores or pharmacies to find it.

On to the diet update. I'm going to try an experiment this week and write only personal posts instead of my usual guitar stuff because it's been a long while since I've done so. I figured a diet update would be a good place to start.

When did I originally start dieting? February 2015.

How fat was I? At my worst, I think I was about 205 pounds. And I say "I think" because that was the point I was so big I was embarrassed to weigh myself. For my height, 205 put me at a BMI at just over 30, which is obese. And while I was obese for only a short period of time, I did cross over. It wasn't pretty.

How long did it take me to lose all the weight? About 6 months.

How much do I weigh right now? 150, which puts me at a BMI of just over 22, which is well within the "safe range" of 18 to 24. BMI 25 and over is overweight, BMI 30 and over is obese. There are plenty of BMI calculators out there if you want to figure out what your number is.

Things that have changed since 2015

I do cook a lot more. And I'm not cooking garbage.

"Cooking" for me used to be macaroni and cheese. But now it's proper food like eggs, rice, onion, other veg and so on.

The only 2 places I get takeout from now is Subway and Hungry Howie's (local pizza chain.) At Subway, I always get the veggie sub. At the pizza house I will buy a medium pepperoni pizza just for me. I used to get the large size but if I try to down that much pizza now all by myself, I'll get sick.

I used to get Chinese takeout but I stopped doing that. And the last major fast food place aside from Subway I've eaten from was Taco Bell. And when was the last time I did that? I couldn't say because I literally don't remember. It was that long ago.

And I don't know if this counts but I'll say it anyway. I will occasionally have Dunkin' Donuts donut holes i.e. munchkins. I only get them once every few months. When I do, I get 8 of them. That's roughly about 600 Calories, which is the equivalent of 2 regular size doughnuts.

Amount of food eaten in a day

Little. Oftentimes I will usually only eat one meal a day.

Previously, I was brought up to believe that one should eat 3 squares a day. And that whole 3 squares thing means breakfast/lunch/dinner that comes from what the USDA used to recommend to eat based on what was formerly called the "Basic Four" food groups. These groups made up a square on a chart, hence 3 square meals a day. The USDA changed over to the whole Food Pyramid/MyPyramid/MyPlate thing in 1992, but still, the Basic Four is what I was taught.

What I've learned over the years is that eating 3 squares a day not only isn't necessary, but leads to health problems. Not major health problems, but rather annoying ones like lethargy, constipation, gas, indigestion and so on.

In other words, the Basic Four diet makes me tired, burpy and farty. Eating less and sticking to one full meal a day suits me much better and I'm not constantly blowing the windows out of my house from sudden flatulent adventures.

Just coffee and flavored water for the most part.

The flavored water thing is relatively new. I've been drinking water right along, but now I flavor it with those cheap "to-go" powder packets and add a splash of apple cider vinegar for a little kick.

I rarely drink anything carbonated these days, but that's just because I'm getting older. Fizzy stuff makes my blood race a bit, probably from the fact drinking anything carbonated literally introduces gas to the system and causes a bit of chaos on the inside once it hits the gut.

I don't drink milk. Sometimes I will buy a small carton of Half & Half for my coffee but I find I like the powdered creamer better. As far I'm concerned, the health risks of all creamers are the same. Whether it's powder or liquid, it's all bad. But I allow it because I don't drink insane amounts of coffee. On average, I will have 2 cups coffee daily. Sometimes I'll have 3, but that's spread out throughout the day, and I never have more than that. I will not do back-to-back cups of coffee.

I honestly don't even know if powdered creamer even counts as dairy, but I'll just assume that it does since I have it.

With my cooking, I switched over to using olive oil exclusively whenever frying anything. I don't use butter for cooking anymore and haven't for a while now.

The only time I have cheese is on pizza when made by someone else. I've not bought cheese in years.

On rare occasion I will have ice cream, bought only in those small cups you see in supermarkets. Never do I buy pints or half-gallon sizes.

I'm not vegetarian, but I don't bother with red meat mainly because I've lost my taste for it.

Yeah, there's always cheap hamburger at the market that I could buy at any time, but I don't. Hamburger is something you have to add a generous amount of stuff to get rid of its bland taste. Oh sure, when you add in lots of salt, seasonings, onions and so on, then it starts getting some flavor to it. But at that point what you're tasting is everything you put in it to mask the taste of the hamburger.

As for things like steaks and such, I don't buy that either. If someone offers me steak, sure, I'll say thank you and dig in. But as far as cooking it in my own kitchen, nah.

When I do buy meat, chicken breast is what I get. Easy to cook, easy to work with, makes for great stir-fry with veg. Works for me.

No bread in the house

The only time I eat anything bread or bread-like is when I get a sandwich from Subway, get a pizza, or eat doughnuts from Dunkin' Donuts.

In the house I have no bread whatsoever because that's a weak point with me. Bread is one of those things where if I have it in the house, it'll be gone in less than 2 days. And since the average loaf is close to 2,000 Calories, I keep it out of the home.

The only time I actually buy bread these days is for special occasions only.

For a long time I avoided Ramen noodles, but I've brought it back into my diet for one simple reason. It cooks really fast and makes for excellent for egg fried noodles.

Example: Break brick of Ramen dry, cook in boiling water for 2 minutes, drain, then run under cold water so it stops cooking and has a semi-rubbery consistency to it. Fry up onions in a pan and wait until they turn color. Fry up 2 eggs with the onion. When eggs start to firm, toss in Ramen. Fry until the eggs are cooked completely and the noodles are slightly crispy. Oil and season to taste. Calories: About 700 to 800-ish. Bear in mind this is a sizable meal.

I don't eat Ramen on its own. I'll combine the noodles with something else like the example above.

Is Ramen junk pasta? Yes. But so are all boxed pastas. Cheap Ramen is made with enriched (meaning vitamin content added) flour, and so are many more expensive pastas. Digestion time in my experience is the same between Ramen and "better" boxed pasta.

So what's the secret to good pasta? Making it yourself and - this is the key thing to remember - never letting it completely dry out.

The fact all boxed pasta is stone dry when you get it is what makes it junk. I accept this fact and am okay with it. This is also why I don't have a problem eating Ramen.

Things that haven't changed (much) since 2015

I still exercise with a light routine twice a day, 6 days a week.

I still do not give anyone advice on how to lose weight unless they specifically ask for it. Believe me, there are times when I'll hear someone say something to me about diet and exercise that I know is 100% wrong and I'll want to correct them, but don't. I keep my trap firmly shut.

My BMI as mentioned above is a just a smidgen over 22. But as far as my appearance is concerned, yes I do look a bit twiggy...

...by today's standards. Society in general has literally forgotten what a regular male physique is supposed to look like.

America is fat. Really fat. So fat that it's become normalized. Over 70% of the population in the USA at the time I write this is fat and can't put down the fork.

This is a photo from the early 1970s out of a clothing catalog: 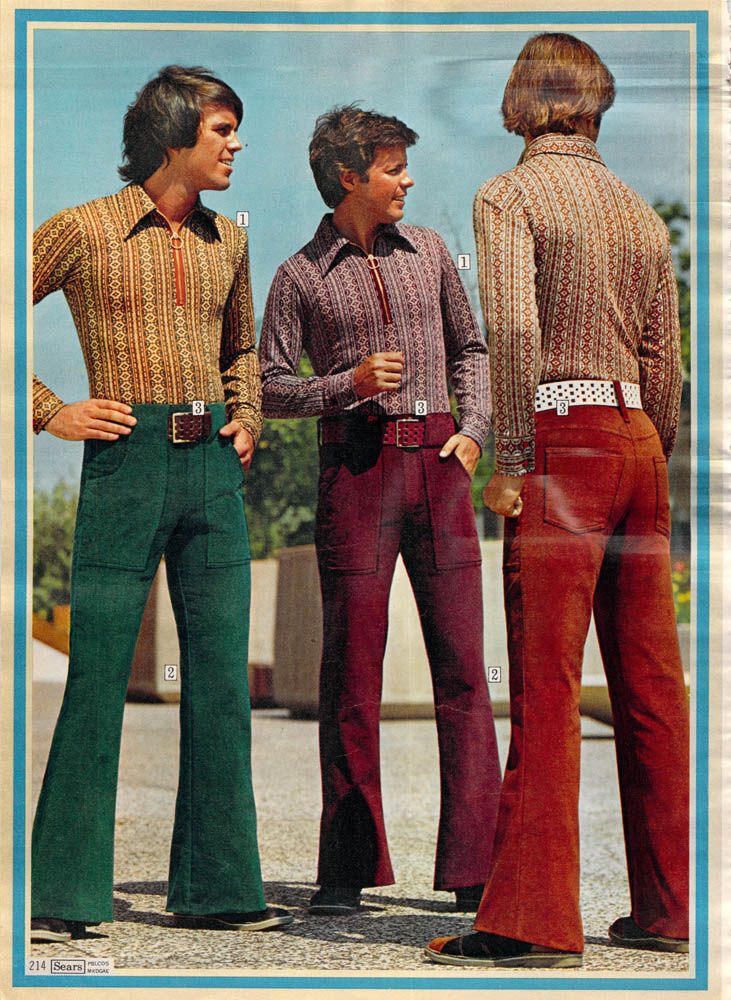 All these guys have thin frames with skinny arms, thin legs and broad shoulders.

This is what normal used to be.

My physique now is similar to the men shown above. And that's not wishful thinking. I legitimately do have a similar frame.

But if you show a photo of myself now or the early '70s photos above to just about anyone, they'll all say the same thing. "Too skinny." Why? Because the majority of America is so bulbous that when you don't see a gut hanging over the beltline, people think that's "wrong."

If not having a gut hanging over the beltline is wrong, then I don't want to be right.