Don't be a waffler

Unofficially, a comment on any web site that has that feature should be 250 words or less. Anything over that and you're waffling. YouTube forces a 500 word limit in their comment system. Too long. Should be 250. And yes, I have tripped the that unofficial limit of 250 in a few instances, but when I do I literally bring it into Windows Live Writer (it has a really spiffy super-fast word counter) and paste my comment in there first before posting and check the word count to make sure I didn't go way overboard.

As a blog author you can be as wordy as you want because, well, you're the author. But a comment is a short response. Repeat: Short. Nobody thinks of a comment as otherwise.

I have with a very clear conscience dropped a TL;DR several times on people who blast out a huge comment, and boy does that tick 'em off.. so I had to come up with a more polite/fun way to say it.

I came up with a doozy. I did a Google Image Search for 'waffle' and one of the results happened to be the National Waffle Association, with accompanying image: 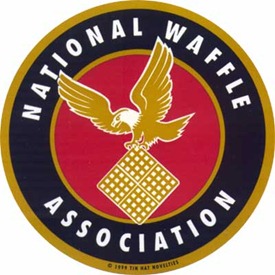 (They do have t-shirts with that logo if you can believe it.)

In addition to that there's a waffle song from MST3K that goes right along with it:

YTMND has a page with just the song with the logo.

Oh hell yes. This is it.

So now when I feel like blasting out a TL;DR but want to be slightly more polite about it, I bust out the National Waffle Association instead.