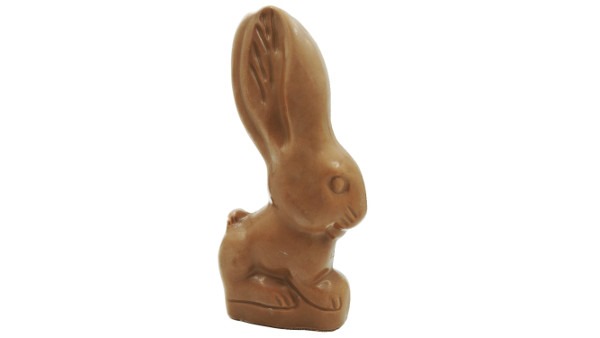 It is interesting what happens when you actually read labels.

In the United States, there are two times of the year where children stuff themselves with all the chocolate they can get their grubby paws on, that being Easter and Halloween, in that order.

Easter candy is easy to come by in March. One of the biggies is, literally, the large solid chocolate Easter bunny.

This is where things get interesting, and this is where my little story about reading labels happens.

I'm at the market buying groceries. I get my items and go to check out. The checkout lane has a long counter before getting to the register where the clerk is, and sometimes they will place a box of discounted items the store wants to get rid of at the beginning of the counter.

The box of sale items at the front of the counter were these large solid chocolate Easter bunnies I mentioned a moment ago. All of them were broken into 2 or 3 pieces, probably because they got knocked around too much during shipment. There was nothing wrong with the chocolate and the packages were still sealed, but the chocolate was broken.

When I was a kid, I used to eat one of those chocolate rabbits every year at Easter time. Sometimes it was the solid rabbit, while at other times it was a huge hollow rabbit. I actually remember preferring the taste of hollow rabbit. Anyway, it's been many years since I've eaten one.

Out of curiosity, I picked up one of the solid chocolate rabbits, flipped over package and read the label.

...per serving. And that package contained 4 servings.

Yes, that means that 1 rabbit had 920 kilocalories total. No, I don't know the sugar content because I didn't bother looking at that part. I'm sure it was an insanely high level.

Then she said something that just made me sad.

"Well, a lot of people are buying these because they're discounted."

I'm sure that's true, given that each one of these chocolate bricks was selling for just 1 dollar each.

As I said above, as a kid I would typically eat one of these chocolate Easter rabbits every year. I remember it taking the better part of a day to eat the whole thing. Even I as the kid who loved his chocolate far too much couldn't even finish that thing in one sitting. But oh yes, I would finish it.

The only reason I ever ate the damned thing is because my mother bought it and let me have it. And it wasn't the only chocolate I had. I would also eat Hershey's Kisses and any other candy I could get my hands on. During Easter time I would consume an insane amount of sugar. It's amazing I didn't blow up like a whale.

I don't eat chocolate like that anymore and haven't for a very long time. The most I'll have now is maybe a Peppermint Patty or a Kit-Kat bar once a week.

What I wish would happen is that anyone considering buying one of those chocolate rabbit bricks would look at the label, realize how bad it is, then just put it back and not buy it. Then after a small while, the chocolate would begin to go bad, it wouldn't be sold and it would all get thrown out...

Instead, people will see the rock bottom sale price and consider that 10 or 11 ounces of chocolate a "good deal." No, not a good deal and never was even when it was at full sale price.

I am honestly surprised large solid chocolate rabbits are still sold in this day and age. People in America are screaming left and right that we have this nationwide obesity epidemic... and yet these disgustingly huge chocolate rabbit bricks are still being sold every March.