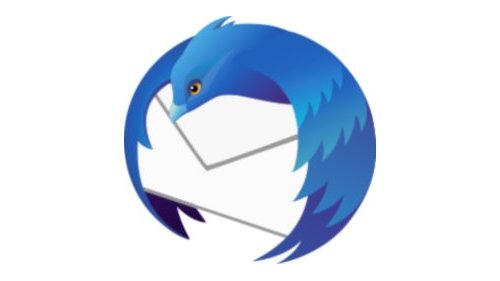 This one involves a story, but it's good internet history.

I've been using the internet long enough to remember when sending mail in anything other than plain text absolutely irritated people for one very simple reason - it increased the size of an email by an astronomical amount back in the day. You have to remember that webmail accounts for the longest time only had 2MB of space. Yes, two megabytes. In fact, until 2004 when Google blew everybody away by offering 1GB of space in Gmail, 25MB of email storage was considered huge and was usually only reserved for paid accounts.

Let me put this in perspective for you.

Imagine it's 1999. You have a free webmail account with a maximum 2MB storage. "Big" plain text emails were 3k in size.

Now imagine some dope using an office computer sending you a mail from Microsoft Outlook with an ultra-stupid signature with an image attachment in it. Now that same email is a whopping 30k or greater in size. That single 30k email just took up 1.5% of your total webmail space available. If you kept receiving emails of that size, you literally could not hold more than 100 emails in your entire account.

Oh, and lest ye forget, you're on dialup. Each time Mr. or Ms. Outlook Moron sends you a mail, it's not only huge but takes triple the time to load. It added even further insult to injury when you waited so long to long the message only to discover the bulk of it was quoted text, and the actual reply was less than five words.

Believe me, there were people back then that got really angry at those dopes using Outlook because of that crap.

It's because of the stuff I just mentioned that many of us absolutely insisted (and oftentimes outright demanded) that email be sent in plain text only. When space and speed are of primary concern, messages have to be kept small on purpose.

When you deal with years of the MUST-USE-PLAIN-TEXT way of using email, it's something that sticks with you.

I use Mozilla Thunderbird 3.1.7 primarily for email communications, and to this day I purposely have the client set to read all mail in plain text.

My emails look like this on read (and compose): 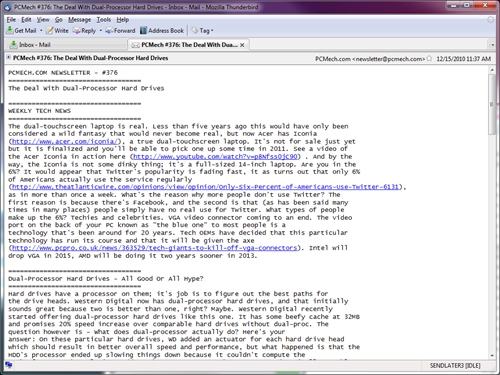 The font o' choice I'm using these days for monospaced delight is Lucida Console. Prior to that I was using Courier New. I also have Consolas but I like Lucida better.

Thunderbird is basically the only modern client left for Windows that actually displays plain text emails correctly. Windows Live Mail 2011 forces Calibri for all plain text mails and there's nothing you can do about it. To me that's a deal-breaker right there, because I want my proper monospaced font.

When it comes to web pages, yes, styled is better because of links, bold/italic/underline, headers and so on. Web pages are supposed to be like that. Emails on the other hand... no. Messages are best when in plain text.

I'm happy Thunderbird allows me to force plain text so I don't have to yap at people to use it. 🙂