the one main reason i don't eat fast food 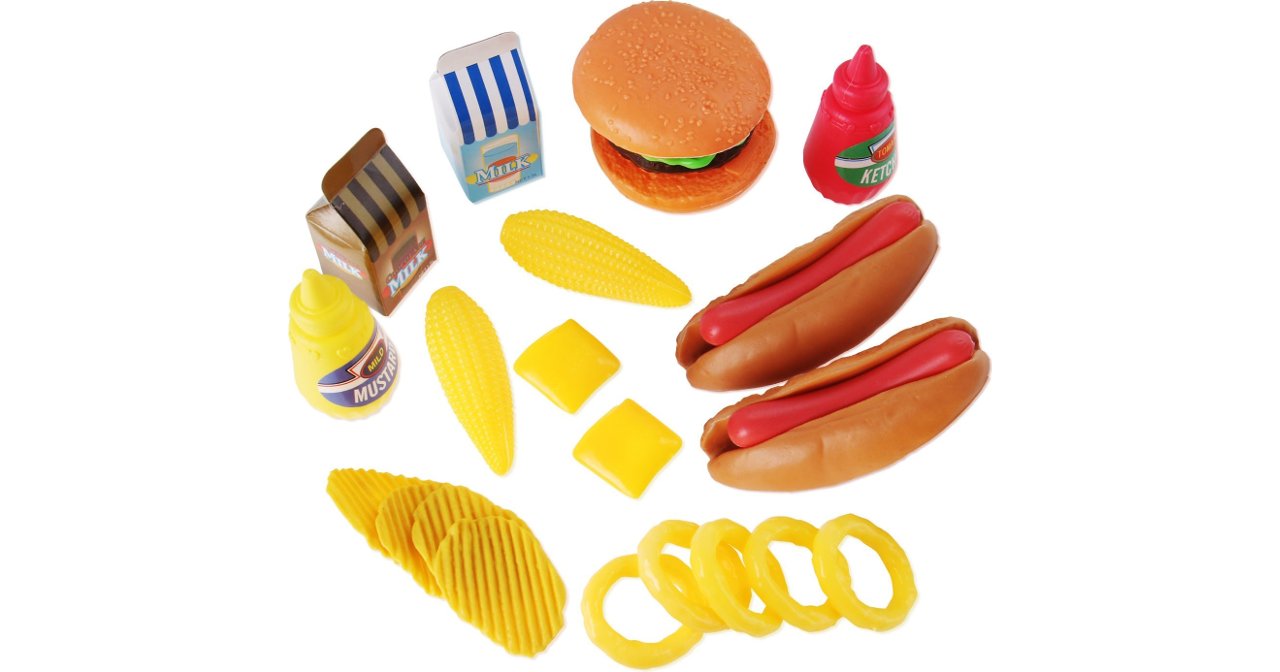 It's actually not the reason you think it is.

Above is a photo of a burger & hot dog with chips and onion rings play set for kids, meaning it's pretend food. I found it interesting that such a thing for kids is actually sold.

As per my last post, yes I still periodically go to Subway and the local pizza house, and I know that counts as fast food. But what I'm talking about here are the burger joints.

My main reason for not eating fast food is actually cost.

Fast food is eff'ing expensive. A look at Fast Food Menu Prices will confirm that quickly.

Since when was $7 considered "value"?

If I am in Super Penny Pincher mode, $7 can buy me a whole week's worth of food. I'd be limited to what I could get (most likely eggs, rice, carrots and Ramen,) but the point is that I could stretch it a full 7 days if I had to.

At fast food places however, 7 bucks in many instances only gets you 1 meal. And in some instances, only 1 sandwich. An example of this is the Wendy's Baconator which after tax is over $7.

Remember, the entire point of fast food is that it's supposed to be fast and cheap. It's still fast today, but not cheap anymore and hasn't been for years.

Here's the crazy part: I can actually get a better price at a traditional restaurant. That shouldn't happen, but that's the way things are these days. For example, biscuits and gravy at Denny's? That's 5 bucks. Sure, I have to wait slightly longer to get it, but it actually costs less.

How much do I save cooking for myself?

I've seen stories about people who eat out every day. Every. Single. Day. And these people eat 3 times daily. If you assume $5 per meal, that's $105 spent every week on eating for just 1 person.

Over a year's time, that's $5,460 spent just for fast food. Include travel expense, and the cost goes even higher.

Spending over 5 grand a year on fast food is insanity.

As far as how much I save by cooking for myself, it's easily thousands saved per year when compared to what I'd otherwise spend on fast stuff.

Would I start eating fast food again if I had the money?

Let's say I had 5 grand a year to blow on fast food.

I'm at a point now where even if I had the cash, I couldn't be swayed back to the fast stuff because what I make at home tastes better.

It's my firm belief that if more people knew how to cook, they'd reach the same conclusion I have and eat at home more often.

For example, even for something simple like eggs, no restaurant whether fast food or traditional can make them the way I prefer. They don't use the seasoning combination or use olive oil like I do. They'll instead serve something to me that while cooked won't have the flavor I like.

It's always better to cook for yourself. Get in the kitchen and make it happen.