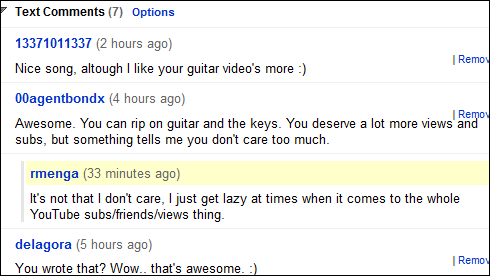 What I said above is absolutely true.

It's probably accurate to say that if I put some effort into music promotion that I could make something out of it. Popularity, fame, money, etc.

I do have all the tools to do that right now. These tools I speak of aren't physical things or special programs or what-have-you, but rather just common sense.

You know that old phrase, "Apply yourself"? Well, that applies to the internet just like it does with anything else you want to accomplish. If you want money, fame and everything that goes with it, you have to make it happen.

How to make it happen? That's easy. You let people know you exist, and so do in such a way that's not spammy. The hard part is that a good solid effort must be put into alerting the masses. More on that in a moment.

Spammy when dealing with music is any time some artist/band promotes in such a way that just leaves you feel cheated. Many bands do this. A lot. And it's wrong. Music fans don't want to feel like "just another customer".

Connecting with your fans on a human level. You don't have to be buddy-buddy with every fan you make (which would be impossible anyway), but you have to be willing to give a little bit of yourself in return.

Should I? Yes. I should connect more with the people who are fans of my work. If I did respond to every comment, sub back every time someone subs to me and respond to all private messages/emails/etc., then yes, my fan base would increase. Exponentially? Probably not.. or maybe it would? I have no idea.

It's definitely something to put on my to-do list. 🙂