My little Dell mini 10v netbook has a 1.6GHz processor and only 1GB RAM. It works fine, but there are times when I wish it was quicker.

Ordinarily I am very much against using anything labeled as a "booster" product for Windows because 99% of the time they do more harm than good.

There is one program however that a lot of people say works great, Game Booster. I don't play games on my netbook, but the Game Booster program claims it kills off a whole bunch of unnecessary Windows processes to speed up general operation. I was still skeptical about it, but it is listed as a CNET top pick and is also hosted at MajorGeeks, and to date I've never downloaded anything from MajorGeeks that was bad for my computer, so I decided to give it a go.

Oh, what a difference this little app makes.

Here's what it did after I ran it: 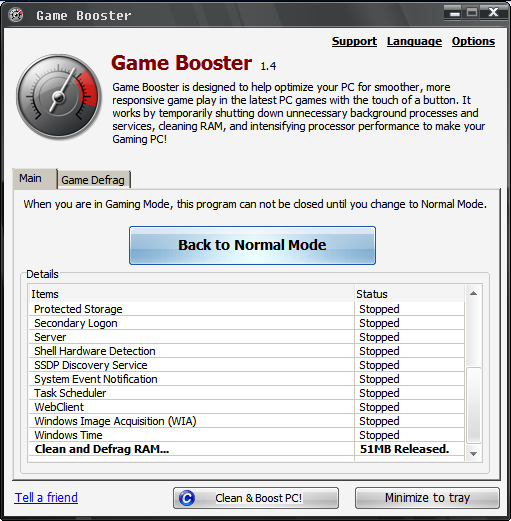 Now you wouldn't think releasing 51MB of memory would do much good, but it did.

Firefox launch time was significantly decreased. Now it loads really, really fast. Just that alone put a big ol' smile on my face. Several other programs I use also speeded up quite a bit, but the browser is what counted the most because that's what I use the most.

Even though I don't use IE8, I tested that out too. That now loads way faster as well.

On both browsers, web page load times are now so minimal I almost think I'm on a wired network instead of wireless.

I also really dig the fact that I can toggle Game Booster on or off at whim. No rebooting necessary.

I give Game Booster a huge thumbs up. It's an awesome, and I consider mandatory, program to have on a netbook with XP.