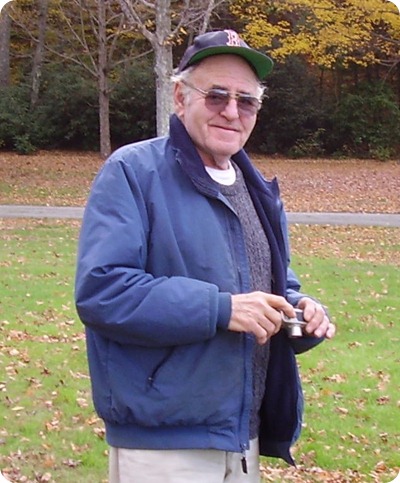 On May 21, 2011 at 6:20am, my father died. I officially have no parents left, meaning both parents and all four grandparents are deceased.

I don't know of a soul that didn't like my father - and I'm not saying that just because he's gone now. Everybody liked him. He was just a very likeable guy. Many who are in my age group that knew him considered him a second father (and for some, first).

Some tidbits of info about his life - and I know I'm probably going to miss a whole bunch of stuff but this is what comes to mind as I write this.

In the Killingly school system he was on the Board of Education and was the first to propose "no sports if you have three D's and an F on your report card". It did not go through and the town lambasted him for even bringing it up. However after he finished his tenure there, it went through.

He did serve in the Navy aboard the USS Coral Sea and had the rank of Third Class Petty Officer. He also did serve during the Korean War briefly. His favorite story from that time was how the transport delivering him back home came back with a few bullet holes very close to the fuselage. Fortunately the plane didn't blow up when that happened, and he made it back along with the rest of the team.

In Florida he continued maritime activities by being very active in the Coast Guard Auxiliary, and routinely participated in watches.

He did graduate from the University of Connecticut with a degree, although I never asked him what his degree was. It just never came up. I'll have to find that out later.

He did in fact have three children. There is myself, my younger sister and one older sister that did not survive after being born. Her name was Joy and she would have been 38 today.

He was a big Patriots, Red Sox and UConn Men's/Women's sports fan.

He had a somewhat large toy train collection that he liked very much.

He also had a somewhat large stamp collection.

All my friends liked my father and in addition had great respect for him.

My father had an impressive list of job occupations, including Nuclear Auditor, Laboratory Technician, and Blood Bank Supervisor to name a few.

He was very active for many years in the local ham radio club ECARA (K1MUJ), which included being the Net Coordinator.

He along with others routinely handled the Springtime Festival Road Race emergency communications for many years.

He was a really good father. Words cannot describe the lengths he went to for my sister and I.

He actively encouraged my sister and I to follow whatever our passions were. Mine was music and my father probably spent close to if not over 10k over the years for musical gear. Keyboards, guitars, amps, etc.

My father was able to show authority without raising his voice.

He made a very good potato salad, and passed on the recipe to my sister. I don't know it because I don't cook.

There's more but I'll save them for later.

It's a bittersweet ending that he died on the "end of the world" day. I'm sure that were he given the choice, he would have purposely picked that day given his sense of humor. It's also true that for my sister and I that a large part of our world is now over. Not forgotten. Just over.