Twenty years is a long time.

I graduated high school in 1993. I actually went to two high schools. The first one was a Catholic "preparatory" school and left mainly because of one teacher who royally ticked me off (and she still works there to this day). The second high school I went to was public, and I entered as a junior. Because of that I never went through the "freshman hazing" thing that pretty much all kids deal with.

The best way I can describe my high school experience is that I was just kinda there. I wasn't popular but I wasn't picked on either. There's a certain type of high school student that qualifies as being in the "everyone else" category, and I was one of those, especially considering I transferred into the school as a third-year student.

Music-wise, 1993 sucked. Above is a cover song of one of the popular songs from that year, Insane in the Brain by Cypress Hill. I love the fact it was covered in a total dork style. Everything about it is awesome.

So anyway, I login to Facebook and see this (parts blurred out because some people freak out about seeing personal info online): 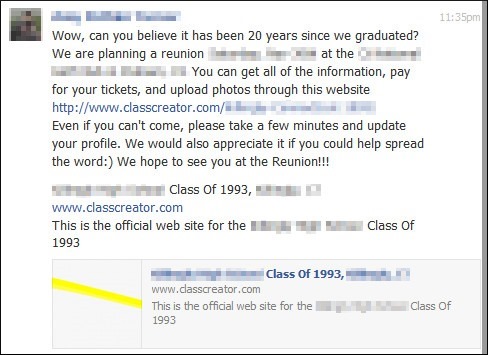 I won't be attending this for a few reasons.

They scheduled it right at the end of November, and for me to book a flight at this time of the year would involve an insanely high plane ticket cost.

Check out how much it would run me if I scheduled a round trip flight from TPA to PVD right now for the tail end of November:

...and that's not including hotel or rental car cost.

Hopefully for future reunions they will schedule for off-season in September or October. Fares are nice and low at those times of the year.

Everyone bowls. And it doesn't matter if you're good at it or if you just plain suck because it's just fun.

If the reunion were at a bowling alley, I'd go, cost be damned. Why? Because bowling is fun and noisy in a good way where there are no silent awkward moments. And nobody has to talk if they don't want to.

In other words, awkwardness is brought down several notches. People can sit back, toss a few bowling balls, drink if they want to and just relax.

All reunions should be held at bowling alleys.

3. It would be weird being a purveyor of infidelity

I'm single by choice, and at times I can be a really flirty guy. At the reunion, I'm pretty sure that would get me into trouble. 🙂

Picture it. I'm there at the reunion in a room full of women, all close to 40 like me, most of whom have lived in New England all their lives. And some of these women need a break from that life real bad, even if just a short one.

Offering any one of those women (yes, married ones included) a chance to spend a few days with me in Tampa Bay where the air is warm and the palm trees wave, with no kids, and do so with no interruptions is something where they'd jump at the opportunity.

I know that many of these women haven't had a good night's sleep in months. Possibly years. Many are busybodies, and sometimes that gets the best of them and they break down and crash. Sometimes they crash real bad. And the idea of hopping a flight to Tampa to spend a few days (and nights) with a guy they used to go to high school with that's totally outside their social circle (meaning they wouldn't get caught) sounds really good. And any one of them who says otherwise is just fooling themselves, because if anything, they really need at least one good solid day of uninterrupted sleep, which they would get here. To them, that's more valuable than a diamond-encrusted tiara.

If you're wondering why they don't do this at home, it's because they've tried it and it doesn't work. I understand how the particular part of New England they're in can drive one f--king crazy. What I did to cure that ill is I outright moved to Florida. But they didn't and stayed. On most days, yeah, they hold it together just fine. But on certain days, there's that "I want a vacation just for a few days ANYWHERE BUT HERE where I am away from EVERYTHING and EVERYONE" thought going on. And oh yeah, I understand that. All too well.

I'm no Don Juan by any means. Far from it. But I offer something they can't get there. And like I said, it's best I don't go just to stay out of trouble. 🙂 I know if I started chatting women up at the meet-up (which I would), I'd get 'the eye' by the attending husbands. That I don't need. They'd especially raise an eyebrow when the women I'm chatting up start getting all happy from talking to me, because it's not like I'd go there and be silent. It's a social thing, so I would, y'know, talk to people.

So yeah, it's best I sit this one out. I figure if one of those women wants to reach out to me, they can send an email. 🙂