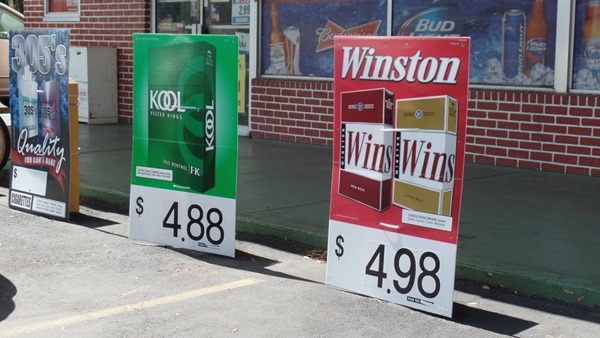 Yes, for real this time.

A while back, and I don't know the exact date, I quit smoking tobacco. However, I never truly quit smoking until very recently.

At first, I was smoking what are known in America as "Class A" cigarettes, which basically means your standard brands like Marlboro, Kool, Winston and so on.

What Florida decided to do at this time was kick in a big increase in cigarette tax, so I had to switch to a cheaper smoke. The cheapest smokes in Tampa were cigarette-sized cigars called Remington, a Good Times brand. They were only $12 a carton (10 packs, 200 cigarettes.)

I never liked those mini-cigars, so I had a small stint with trying cartomizer style e-cigarettes with brands NJOY and blucig. The technology was young and expensive at the time, and this was way before they were carried in just about every convenience store. Simply put, they barely worked, I dumped them and went back to those awful mini-cigars.

I got to a point where I couldn't stand those mini-cigars anymore, and started buying tobacco by the bag and began making my own smokes. I would buy the tobacco, the tubes and a cigarette injector (which moves the tobacco into the tube.) I liked this, but making cigarettes is a genuinely annoying process.

This lasted for a short few months until Florida, yet again, found a way to hike up the price of tobacco, even if you bought it straight by the bag. Now smoking was getting too expensive again.

One day I go to the smoke shop for a refill of tobacco and tubes, and the girl running the place stocked some e-smoking stuff. It was 20 bucks for a battery, charger and tank in a little kit, and another $10 for a small bottle of some e-juice. Since I was desperate to save some money on smoking, I spent the cash, took it home and tried it.

After a few weeks of experimentation, a whole lot of trial and error, finding out I could get e-smoking supplies WAY cheaper on eBay, and figuring out where to get proper e-liquid WAY cheaper locally, I stopped smoking tobacco completely and switched to e-smoking, otherwise known as vaping.

It wasn't long before I kicked tobacco completely. However, this wasn't really quitting smoking. It was substituting it for something else. While true vaping is odorless since there's no smoke (just vapor) and no tar, it's still smoking.

I don't recall exactly when I started vaping, but it was right around the beginning of 2014.

In the way vaping works, you pick the flavor and nicotine strength of your e-liquid. The nicotine level starts at 0 and ends at 24 milligrams. I've never seen e-liquid with nicotine stronger than 24mg.

I remember trying 24mg nicotine strength e-liquid once, and I immediately got dizzy from it. Way too strong. I backed down to 16mg, and I was much more comfortable with that.

At this point in my smoking history, I had whittled down my monthly smoking cost to about $25/month. This is insanely low compared to cheap-ass tobacco which at lowest was $40/month - and only if you smoked lightly.

I believe it was in either late 2014 or early 2015 that I switched from 16mg to 8mg nicotine strength. By this time, I had whittled down the cost even further to about $20/month. It wasn't that I was vaping less. I just found ways to decrease the cost even more.

You would think this is good. No more nicotine, hooray hooray, right? Well, yeah, that's a good step forward, but there were problems.

In February 2015, I decided to lose weight, did so and kept it off. But I still continued to vape, and this is when the side effects of vaping really started happening.

The single biggest side effect of vaping is, without question, adult onset acne. Where, specifically? Right on the face. In the "T-Zone," specifically. Forehead, nose and cheeks.

Put simply, my face turned into an oil slick. It was bad. I would get so much acne on my forehead that I'd have to wear a hat because it was so damned embarrassing.

I thought, incorrectly, that my diet was causing breakouts. Nope. It was the vaping.

If you do a Google search for "vaping acne," you will find discussions of many people all encountering the same thing. Acne, acne and more acne.

In those same discussions, you will discover there is a long list of things one can have an allergic reaction to from vaping.

From the liquid, one can have an allergic reaction to the propylene glycol, vegetable glycerin or sweeteners (usually sucralose.)

From the vaping setup itself, one can have an allergic reaction to the metal, the wick or a whole host of other things depending on what kind of pen it is.

When I started vaping, it was still a very new thing. But now there's information all over the internet about the dangers and side effects some (many?) may encounter.

Within less than 2 days after I quit vaping, my face started clearing up, and fast. That completely convinced me to never go back to it.

...before e-liquid is banned from sale everywhere unless some things change about the way it's sold.

Currently, makers of e-liquid are not required to tell you what's in it at all. There is no ingredient list on the side, and certainly no health warning label.

At bare minimum, there should at least be an ingredient list shown on every bottle of the stuff sold.

Will I ever go back to regular smoking?

No, because it would be a step backwards.

I lost a bunch of weight, exercise regularly and eat well. This is a far cry from the old me that was fat, smoked like a chimney, ate terribly and never exercised. I don't want to go back to that old me. The way I am now is much better.