i suppose i should have known better 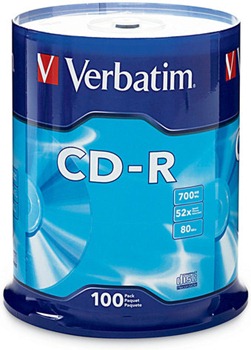 Recently I bought a 100-pack of Staples-brand CD-R discs. As audio CDs, they work fine and I thought they would have worked equally fine as data CDs.

I had a bunch of data stuff I wanted to specifically burn to CD-R, so I started burning away. I even purposely set it to 'verify' after each burn to ensure it was a proper data write. Well, that was all for naught because one of the brand new discs I burned screwed up. I popped in the disc the next day as I actually needed to get something off of it, and there was a read error. Unbelievable. Fortunately I was able to get the data off it by popping it into an older laptop I have with an optical drive, but the point is that the disc was messed up and it was directly due to crappy media.

My solution? Do what I should have done the first time, and bought a 100-pack of Verbatim CD-R discs. Cost me $20 at CompUSA and they are the exact discs you see pictured.

Here's the interesting part about my lil' shopping trip to get those discs.

Okay, so I fight traffic to go to CompUSA to get my discs because I know CompUSA carries Verbatim brand. I get in there and march straight to the Wall-O-Discs area where there's craploads of blank media for sale.

The entire wall was almost exclusively DVD. If there was some Blu-ray, I didn't see it. DVD, DVD and more DVD. At the very end of the wall were the CD-R discs. The only brands were HP, Memorex and Verbatim and out of the entire wall there were maybe only ten 100-packs and five 50-packs. Out of the entire wall. That was it. Granted, most department stores don't stock large amounts of blank media, but this is a computer store we're talking about with a whole wall of discs, and they barely had any selection for CD-R media.

I swear, CD-R discs are almost extinct in brick-and-mortar stores these days and I was happy they actually had them. Were I to take a guess, I'm betting CD-R will be gone from retail stores by 2012 or at the latest 2013. At that point they'll only be available online.

If you burn audio CDs at all or need CD-R discs for whatever other reason, my recommendation is to buy a 100-pack or two now.