If the eBay guitar for sale states "with upgrades" in the title, avoid it 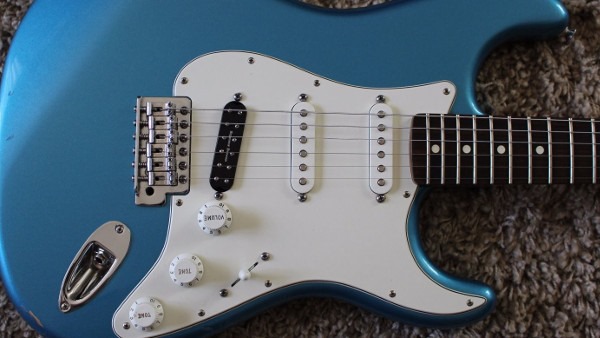 Oh, the horror of "upgraded" guitars on eBay. All junk. All of them.

The guitar above is a total train wreck, as it has "upgrades." Woe be to the fool who buys it, because the person who "upgraded" it is an idiot. Spelling errors galore are in the listing, including "gig back" where it should have stated "gig bag" (how can one screw that up?)

Typical to "upgraded" guitars, there's a mismatched pickup, a bad ding next to the output jack and only there (it's guaranteed this guitar was dropped on the floor, and keep in mind it's a 2011 model,) has electronics upgrades under the pick guard which, of course, are not photographed, the tremolo arm is lost as is the back plate, and well, it's like I said, the guitar is a train wreck.

Unfortunately, some fool will buy it.

There are many, many idiots who "upgrade" guitars, totally screw them up and then sell them on eBay. Check out what a search for "stratocaster with upgrades" brings up on eBay, and enjoy the horror show. Junk, junk, and more junk.

"Upgrades" is a no-go phrase when buying a used guitar

Only morons use that word when posting a guitar for sale. Yes, I am saying that legitimately stupid people think it's a selling point. It's not. If it was so "upgraded," why sell it? Here's the answer: Because the guitar was screwed up by the seller, that's why.

You are, in all honesty, better off buying a neck and a "loaded" body.

Using the Strat as an example, try searches for "stratocaster neck" and another for "loaded stratocaster body".

A Fender Mexico neck will be about $150 to $175.  The body will be anywhere from $200 to $600, depending on what you want to spend. The point is that you can get yourself an entire working Fender Stratocaster guitar for as little as $350.

Reminder: Make sure to get a neck with tuners on it and a good nut.

Yes, you will probably have to use a shim to get the neck pocket leveled correctly (easily done using a business card,) and you will have to adjust the truss rod. That's fine. Other than that, all it takes is putting two pieces together. Neck to body. That's it. Done and done.

The only extra cost involved may be neck bolts and bolt plate, both of which are easily bought at just about any guitar store. You might even be able to get them for free. Ask the seller of the neck if he is including the neck bolts and the bolt plate, and he might throw them in.

Want to go even cheaper?

Don't buy the "upgraded" used guitar. Put it together yourself.

"Upgraded" guitars are sold by people who want to unload their mistakes on you. Don't be one of those people.

A brand new loaded pick guard can't hide mistakes, as photos will show exactly how it's wired right up front. An unloaded Strat body really can't hide mistakes either other than maybe slight paint imperfections that a camera can't capture. The neck is the only thing that could hide mistakes, but being that eBay sellers take their seller rating very seriously, it's not within their best interest to peddle junk when it comes to guitar necks.

You are truly better off piecing together a guitar if it's money you're trying to save. The body will be new or new-ish, the electronics will be new and the neck will be used.

If you do the 3-piece Strat method, the only hard part will be soldering one wire, that being the ground wire. Just one black wire through the body soldered to the tremolo claw and that's it. That will be the most electronics work you will have to do to have a working Strat guitar with "Fender" on the headstock for 300 bucks.

Worth it over buying a new Fender Mexico Strat?

What does spending the extra $200 get you? A complete, working guitar with an alder body, a warranty and genuine Fender electronics. If you find that stuff important, get the new one. But if you'd rather shave off 200 bucks, do the 3-piece method.

There's nothing wrong with basswood, save for one thing. It is a bit soft. What that means is that it dents easily compared to alder, and you have to be a bit gentle and not over-tighten when screwing in things like control plates, pick guards and strap buttons. "Slightly tighter than hand tight" is the best way to screw in things like pick guards and strap buttons on a basswood body.

What's the best part about basswood? It's very consistent, just like alder is. You could take two Strat basswood bodies side-by-side, and there will probably be only a few tenths of a pound in weight difference. There are no surprises with weight, whereas with a different material like ash, weight can vary wildly from body to body.

When you want a good, predictable guitar body material that costs less, basswood is a great choice. As long as you're not dropping the guitar on the floor or knocking it off a stand or some other such nonsense, your basswood-bodied guitar will last for a good long time.

Why buy it? It's cheap, it's the right weight, and you can apply just about any paint to it and it will come out very nicely.