in ohio excitement did abound

This is the longest thing I've ever written - so it's an extended entry. Clicky away and enjoy - if you can muddle thru it all. 🙂 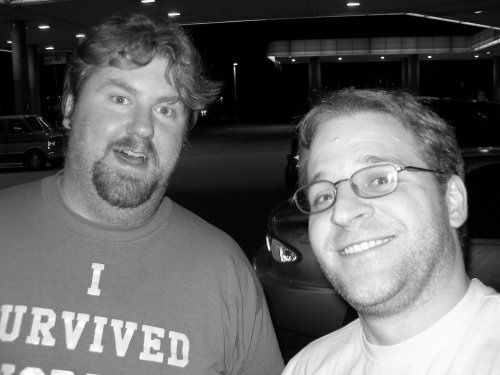 Me and Brent at the local Sheetz after a week of recording Seven of Nine. 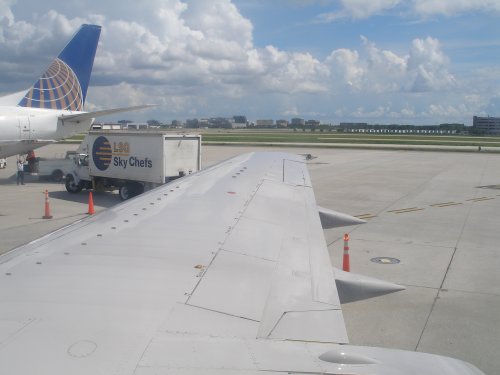 Your oh-so-standard "take a shot out the window of the 737 photo. Tampa Int'l Airport. 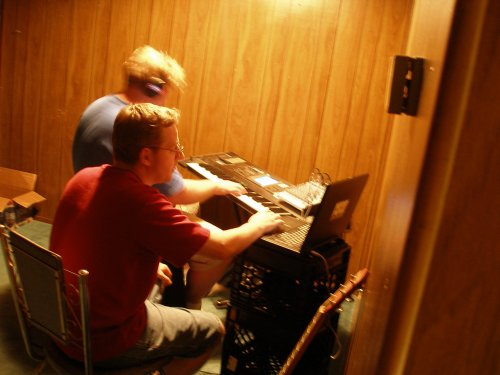 Brent and I doing some recording for Seven of Nine. 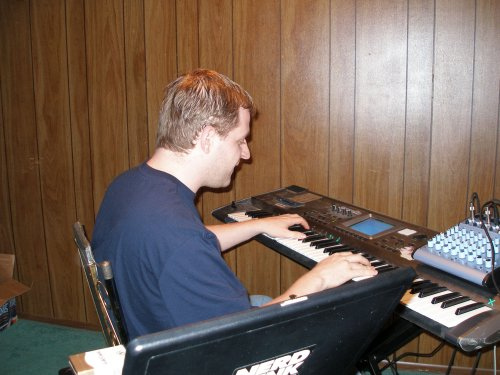 Me plick-placking away on Brent's Roland Fantom. Envious? 🙂

Thursday, September 7th 2006. I arrive a little after eleven o'clock in the morning at Tampa International Airport. Just a few hours earlier I left Cleveland Ohio. It's good to be back home, but I'm dead tired.

As I debark from the Continental Boeing 737, I realize I'm home again, but not quite - I still have to find my truck because I totally forgot where I parked it. I think it's something like Row 9 or Row 10 in the outside economy parking lot at TPA.

As I walk around I soon see signs to grab a shuttle that will lead back to the terminal. I grab the first monorail.

In the terminal I'm wondering Okay.. first I gotta get out of this place.. wait a sec, I gotta wizz.

Okay, where was I. Oh yeah, I gotta find a way out of here.

I see an Information booth. No one is manning the booth. Lovely.

I walk around the terminal a little more. There's another Information booth - and someone is manning it.

Where do I get a shuttle bus back to the parking lot?

Info lady with heavy hispanic accent tells me where it is. Okee. You go down da escalator, then to da left. Go out da door. Is right there.

Thank you! I say cheerily. Down the escalator and to the left I go.

Outside I ask one of the security guys where the shuttle bus for the parking lot is.

Go straight to the end of the sidewalk, you'll see a bus stop there.

I grab a shuttle bus minutes later and head out to the parking lot. I was right - I was very close to Row 9.

I unlock the truck and get in. Florida weather has, as usual, turned the interior into a sauna - but that's okay. I turn the engine, crank the A/C, plug in my GPS then do a quick check. Yep. Everything's here. Truck was not broken into (and in TPA it's extremely unlikely anyway but I check regardless).

I look to the passenger seat. There's sand on it from a pretty girl that I took to the beach last week. Wow, do I miss her. I'll call her later but I'm too tired right now.

I remember I have to call that pretty girl later to get my fish back. She's been fish-sitting Bob V for me.

In my apartment, I find that everything is as I left it. Very comforting.

Where to begin.. sheesh. I'll start with the flights.

Tampa Int'l Airport is officially the most awesome airport ever. Almost no lines, extremely friendly and courteous staff (almost to the point of shock), wide aisles, big signs. Everything is super-duper easy.

On the flight I get an entire row (three seats) on the 737 to myself. How cool is that. The plane hardly has anyone on it. I munch on pretzels and Sprite when it's served as the in-flight snack.

And here's why it sucked.

CLE is loud, obnoxious and outright confusing to find where the heck it is you're supposed to go, however, since I did not have any bags to check, a lady walked by and said (in shouter voice) IS THERE ANYONE WITH E-TICKETS THAT IS NOT CHECKING LUGGAGE? She literally has to yell else she will not be heard.

I raise my hand.

She points me to the e-ticket desk. I got to skip a line of at least fifty people.

The flight itself was miserable.

Even though I was fortunate enough to get a window seat, two young parents, a barely-a-man and barely-a-woman sat in front of me with their crap-storm toddler. This cute little bundle of joy stunk - and stunk bad. She stunk so bad that when the flight attendant came by, he scrunched his nose in disgust and said politely..

You know, there is a baby changing station in the restroom.

Yeah. For real. She actually said that.

THIRTY MINUTES go by and I'm literally GAGGING from the stench of this little girl.

After that, the mother FINALLY gets up and heads to the back of the plane to change Little Ms. Crap-Storm. This only worked for for about one hour. Then Ms. Crap-Storm started to stink AGAIN.

In addition, Crap-Storm cried every fifteen minutes. But wait, there's more. FOUR OTHER KIDS on the place also either did the following:

This flight was not the worst two hours of my life - but darn close.

After arriving in Cleveland, Jeff was there to pick me up at the airport. Brent was not able to do so because he had obligations to attend to at work. Jeff is a cool guy. Artist extreme and the company he works for does outstanding work also.

After touring the GoMedia office I get to meet up with Brent. The guy is real easy to get along with and I know the recording sessions for Seven of Nine will go well (and they did).

Look out for the Mantua fuzz

One of the days of recording (I don't remember which day) at two o'clock in the morning we decide it's time to go check some e-mail since the studio doesn't have internet access in it. Brent has his PSP with him which has the capability to grab wireless internet whereever it's open.

So Brent and I are walking around Mantua at two in the morning looking for a wi-fi signal. A local cop pulls over, gets out of his car, lights up a cigarette and shoots the breeze with us for about twenty minutes. The guy had no idea we were attempting to "borrow" internet.

Nice cop, however. After that he headed out.

It was just kind of funny. The cop basically had nothing better to do. And the guy was all right. No typical cop attitudes or anything.

Drunk attempts to invade the studio

During the recording sessions for "Alone With You" which involves an acoustic guitar, I'm playing the song and a knock knock knock is heard from the front door.

Some dude is holding a can of beer and says some gibberish to the effect of..

Oh, wow man.. I thought you guys were listening to a stereo. That's some cool acoustic music. Hey, yeah man I want to record an album too. By the way, if you hear any noise from me downstairs, it's just me killing my kids.

Yes, he really said that.

To the best of our knowledge his children are still alive.

Everyone knows the Dan Haylett from the Space Camp song. But as I discovered, Mantua has Hayletts everywhere. They're all over the place. Big family. 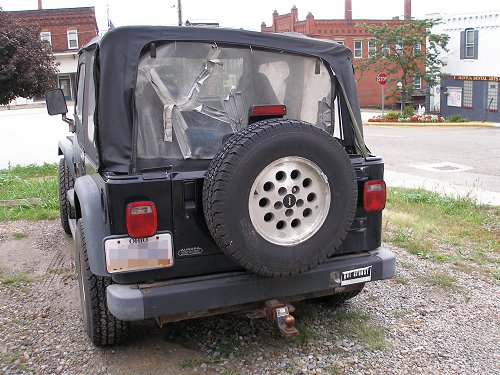 Brent's ride is a 1997 Jeep Wrangler. It's been rolled twice and still kickin'. This Jeep has definitely seen better days, but, it is a true testament as to how tough Jeeps truly are - because this one has had the snot beaten out of it and thensome.

Although this hasn't been mentioned on Nerd Punk yet, I did actually witness Brent conduct a live, as in on-tv-live, interview on Sun TV via webcam. Sun TV really has their act together and it was a well-done interview. I'm hoping they'll post a link to it or something.

A running gag (but maybe not any longer) is that both Jeff and Brent refer to me as "famous producer" Rich Menga whenever introducing me to anyone. And I mean anyone. I guess the title may stick? Who knows. I think it's funny.

Okay, so why is the album called Seven of Nine? Is it a Star Trek reference? Sort of. Brent had nine songs to get finished - but due to time constraints (it was only a week after all) we only got seven done, hence "seven of nine".

But not to worry, I left Brent with enough studio knowledge (which he sponged in very well) to complete the other two unfinished songs.

And in case you're all wondering, YES, the album is done. As in truly done. No "we're working on it" stuff. It is 100% finished.

(Yeah you knew there was a catch, but it's not a catch.. read on)

The audio is finished but there are other things that need to take place, such as cover design, compact disc distribution (as there are more than a few out there who want to buy it) and other things besides that.

Samples will appear soon on the nerdpunk.com web site. And it's good. I'm not just saying that because I produced it. It really, truly, is good. The album came out better than I ever hoped it would. Brent is a fine musician and we worked well in getting done the task I went to Ohio for in the first place.

I'm dead tired right now. I was going to do some laundry, but fuggit. I've been up for over twelve hours.

And I'm supposed to go into work tomorrow to do up a review on the Olympus SP-320 on video.

Hopefully the bags under my eyes won't be too obvious. 🙂