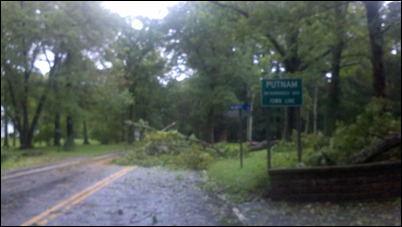 Hurricane Irene did some pretty major damage in New England, which from what I've seen from photos and video is comparable to the damage the Blizzard of '78 did.

I received photos from a friend that still lives in the town I grew up in (one of which shown at right), and what I saw was some serious stuff. Uprooted trees, gas stations with long lines of cars because other stations were knocked out of commission, and so on. It's going to take at least a few more weeks before everything that was destroyed or damaged is fixed up there.

Ironically, I've had a fairly uneventful weather disaster experience here in Tampa Bay Florida. Why ironic? Because I live in what's known as Lightning Alley. During the summer months there are storms almost every day, the majority of which are shooting lighting all over the place. How much lightning can happen in just one year? Try 22,000 bolts.

There have been threats of hurricanes, but no biggies have landed in Tampa Bay in my tenure here. Not yet, anyway. Will it happen? Eventually, yes. When it does, all I can hope for is that I'm not on the road, in a safe structure and have enough provisions to last a week.

The last whopper hurricane that nailed Tampa Bay was Frances; this happened before I moved here. Since that time, there hasn't been anything major, but eventually there will be.

My lack of hurricane preparedness

Right now I'm not prepared for a hurricane at all, and that's stupid because it's really easy to prepare for, all save for washing yourself which I'll get to in a moment.

Concerning eats, canned goods and dry goods can easily last a week. If hot food is needed, you can use a portable camping stove - but only for stuff like mac-and-cheese, pasta and rice because any meat you would have would be spoiled quickly.

As for drinks, bottled water works fine for that. If you want flavor, add in some iced tea mix. Granted, it won't be cold, but who cares as long as you can drink it and survive.

Concerning clothes, one can easily wear a pair of jeans for three days in a row and nobody will notice as long as they're not dirtied up. Socks you don't worry about because you just wear sandals instead. As for shirts and underwear, once you're out, you're out.

The best way to get clothes ready for an incoming hurricane is to first take inventory of all your clothes items. If you have enough clean clothes for a full week, you're okay. If not, you need to buy some so you can last a week without washing anything. After that, when you know a hurricane is coming, wash every single clothes item you have so you know you'll have at least a full week's worth of clothes without having to do a load of laundry.

You can test your readiness clothes-wise for a hurricane simply by washing all your clothes, then not doing a laundry for a week to see if you run out of clothes before then. If you run out, well, you know what to do.

Washing oneself is the most pain-in-the-ass part about surviving with no power and no water. I do know how to do it, but it's not fun.

All you need to clean yourself is a half-gallon of water, a large pot, a bath strap and a bar of soap.

You put the pot in the tub and fill it with the half-gallon of water. Soak the bath strap and get yourself wet everywhere. Rub the soap on the bath strap to lather it up and wash yourself. Wash everywhere, including your head. Don't bother with shampoo as the soap will do the job (at least for men with short hair). Soak the strap again, rinse off as best you can. Lift the pot and pour the water out over your head to rinse again. Towel dry. Done.

If you're wondering why you use a bath strap and not a sponge, it's because the strap can be used with both hands to wash your back as well as the front. If you tried washing with just a sponge, it's doubtful you'd even get your entire back wet.

The water will be cold while you're doing all this, but the point is you can wash yourself relatively well twice a day until the water gets turned back on. And yes that means you'll be using a gallon of water a day just to wash yourself.

Strictly speaking from a water perspective, the absolute bare minimum of water you need to survive a week with no running water is 10 gallons. If I were in a house with four people, I wouldn't hesitate buying a 55-gallon plastic drum and filling it with water just for emergency purposes. In fact, I'd probably use two. Four people could easily survive on 110 gallons of water over the course of a week.

I should note that the seal on a 55-gallon drum of water must be 100% tight and not allow any air in, else you'll get algae (as in it starts turning green), and that's no good.

For the linked site above that sells the 55-gallon plastic drums, yeah you should get those. Don't do that thing where you get them used from the carwash or anything like that, because the reason they get rid of them in the first place is because the seals are bad.

It's probably also a good idea to invest in a battery-powered siphon for getting water out of the drum.

I really should get my ass together with this...

I need to buy several gallon jugs (7 or 8 should do), stock up on dry/canned goods and that's pretty much it.

One other thing I forgot to mention is that if a hurricane was for-real coming, I'd also make a quick run to the barber and have my hair crew-cut. Would make for easier washing if there was no running water.