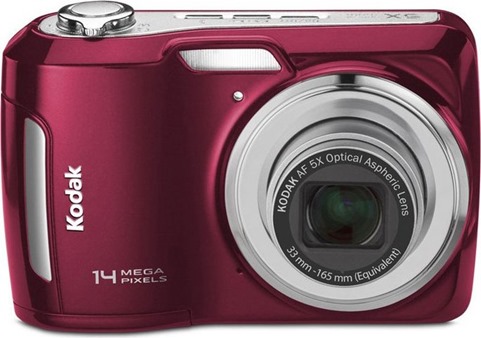 To my regular readers, I know your first question is, "Didn't you just recently say you bought a used Samsung S860?" Yeah, well, that didn't work out.

I did not receive the S860 due to a shipping issue, which specifically was the fact that UPS cannot ship to a PO box. I bought the camera off eBay, and the seller was probably unaware of this fact, so I never received the camera. I requested a refund for the purchase and got it, so no harm done. Even though I never got what I bought, I rated the transaction as positive because the seller was very quick with the refund.

I decided instead to take my own advice and bought a new red Kodak C195, which I should receive before the end of the week. That camera also comes in blue, purple and silver as you'll see on that link. For some strange reason, the purple one has a sky-high price, so stick to the silver, red or blue. If looking to penny-pinch, the silver is the cheapest of the lot.

The total price paid, shipping included, was $47.43. That's $12.43 more than the $35 self-imposed limit I put for spending money on a digital camera, but said honestly, there is no better new budget camera out there that operates off AA batteries.

When you compare the C195 to other 2-AA powered new cameras, you see how good of a deal you're getting. The Nikon CoolPix L28 is usually $80 to $90. The Fujifilm Finepix AX650 is also $80 to $90. After that, anything you buy that runs off two AA batteries will run into over-$100 territory. True, you get more megapixels and HD video recording with the higher-priced stuff whereas with the C195 you don't, but to pay almost double for HD video on a camera that runs off two AA batteries? That's a bit ridiculous. If I required HD video recording capability, yeah, then I can justify using a proprietary battery to get that. But to record HD from a 2-AA powered camera? Not a good idea. I wanted a camera that could take good still photos, and the C195 can do that easily.

A standard complaint about a lot of digital cameras is that most of the megapixel settings are unusable due to the 4:3 crapola going on. The C195 fixed that easily by purposely having certain MP settings for specific screen or print use. Problem solved.

If the goal is to take photos with the specific intent of printing them, you use 3:2 because that's a true what-you-see-is-what-will-print, whether printing on your own or having a shop do it. 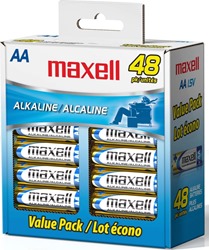 I was tempted... oh man, was I tempted, to buy the 48 count box of Maxell AA batteries, and darned near did because those batteries are cheap and good. Given that the shelf life is something like 10 years, you buy a box of those and it will be a long time before you have to buy another. Definitely the best deal for AA batteries that exists.

If you use AA batteries for a lot of things, like game controllers, remote controls and so on, having that 48-count box is actually pretty awesome. Never seen a 48-count box of batteries in person? I'm not surprised, because they don't sell them in stores. The Big Ol' Box O' Batteries is definitely an online-only thing. Fortunately, it's cheap.

I could have opted for lithium AA batteries, which of course last far longer than regular alkaline batteries do. But in my estimation, you just don't get as much bang for the buck.

The #1 battery-killer in a digital camera, aside from recording video, is the flash. Every time that flash fires, you're eating up a good chunk of battery life. Being I never take night photos because point-and-shoot cameras have always sucked at that anyway, I don't use the flash at all, and therefore my plain ol' alkaline batteries last a good long time.

I'd say the only real advantage of using a fresh set of lithium AAs in a digital camera is that yes, you absolutely will be able to use that camera all day long, assuming no video recording and only moderate use of the flash. With alkaline AAs, you could get through about maybe 3/4 of the day with same usage before having to swap out to a fresh set.

As the old saying goes, your mileage may vary. If you use lithium, that's fine. I use alkaline because I just feel I get more of my money's worth out of them.

The #1 flaw in the C195 concerning battery life: Continuous AF.

This means whenever it's on, it's always auto-focusing. Thankfully, this can be turned off when you switch to Single AF. With Continuous AF on, having the lens motor always adjusting would kill batteries real quick. Single AF simply means that you have to do the half-shutter press to focus just like with any other digital camera - which is what I would want in the first place.

Continuous AF would do nothing but frustrate me to no end because I'm 100% sure it would always focus on the wrong stuff, producing nothing but "fuzzy" photos. Again, I'm thankful it can be turned off. If it couldn't, that would have been a total deal-breaker.

Convenience. AA batteries are available everywhere. And I don't mind carrying a spare set in my pocket when out taking photos.

The ISO range is really good, and yes you can set it manually. Will the upper-end ISO result in a lot of digital noise in low-light situations? Not sure, but I'll find out.

Supposedly, the C195 can have exposure time set really long, even up to 8 seconds(?!) If that's true, then it can do streaked light shots. Everyone loves those kind of shots, but they are not easy to shoot. It requires the camera to be on a fixed mount like a tripod, and there is no such thing as a "standard streaked light shot" because each environment is unique.

However, the fact I can even do that on a sub-$50 new digital camera is pretty cool.

Something about my Fujifilm A820 that's always bugged me is that the color representation is kinda blah. The C195 has 5 color modes. Vivid, full, basic, black-and-white and sepia.

What I'm hoping is that one of these settings will make colors really pop, especially for close-up macro shots.

The C195 does have a panorama mode where you can stitch together up to 3 photos. In full 14MP mode, that will result in one big-ass photo, theoretically up to a maximum 12,864 pixels wide, depending on where the stitch happens for each frame.

My crappy cell phone has a panorama feature, which can, believe it or not, stitch up to 6 frames with its 2MP camera. I've actually done that with the phone and while the quality was awful, the fact I could do it was pretty cool.

It will be interesting to see how good or not-good the panorama feature is on the C195, and whether I can get away with using it without a tripod. Ordinarily, panoramic photos work best when on the tripod because all you have to do is just swivel a little bit for each frame. Getting a good by-hand panoramic photo directly depends on how good the software is in the camera, specifically referring to how good it can "see" edges of the last frame taken.

I'm not expecting miracles from the C195, but I'm hoping the panorama feature is good enough to be used by hand, because I don't like using a tripod.

This for all intents and purposes is the "mostly manual mode" for the C195. When you want access to manual ISO, manual exposure and a few other things, that's what Program Mode is for.

I say "mostly manual" because it's not 100% manual. Some stuff will still be automatic, but from reading a copy of the PDF manual I downloaded, Program Mode gives enough manual control to get the custom settings desired, at least for me.

More than good enough for under 50 bucks

I know that the C195 is one of The Last Good AA-powered Digital Cameras, so the time to buy it was now. It's more than I wanted to spend, but it's the best deal going. Presently, you really can't do any better for a new, repeat, new AA-powered camera for under 50 bucks.