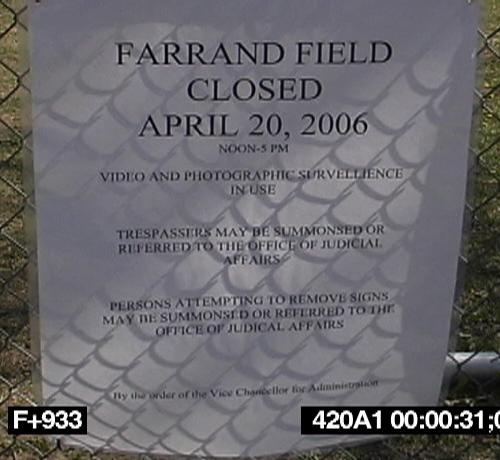 No, I did not take the above photo (obviously since it's in Colorado and I'm in Florida), but check this out (quoted from where I got the picture from):

On 4-20-2006 University officials closed Farrand Field from 12 Noon until 5 PM. The field was closed off with barricades, yellow jacketed "event staff" personnel and police officers.

Approximately 40 signs were posted on all sides of the field advising that the field was closed and that video and photographic survellience was going to be used on and around the field that day. A photo of one of the signs is shown to the right.

Those individuals who are pictured below and on additional pages were photographed on the field during the closure hours as posted on the signs.

Okay, now here's the layman's definition of what happened:

On 4/20 (yeah, 4/20, oddly enough), Farrand Field was closed from noon to 5pm. It was totally obvious it was closed. Yellow tape everywhere, forty frickin' signs, event staff, and to top it off - all signs said "VIDEO AND PHOTOGRAPHIC SURVEILLANCE IN USE".

So it seems pretty damned obvious that you should not go there that day from noon to 5pm if you're a weed smoker, right? Right.

Evidently all the weed smokers in Colorado near Farrand Field forgot how to read that day. A whole boatload of pics and video were taken of weed smokers during the closure hours even though it was PAINFULLY OBVIOUS where and when the surveillance was going to take place. All they had to do was NOT be there that day from noon to 5pm.

Even though I don't smoke weed, I would side with the pot smokers if the surveillance was unannounced, done in secret or whatever. But it wasn't. For crap's sakes, there were SIGNS EVERYWHERE, with the TIME and DATE on them stating when the surveillance would happen!

Note the mug shots taken by surveillance. Some people actually smiled at the camera as if to say "Yes! Lookit me! I'm a pothead! Woo-hoo!"

Anyone who ever wanted proof that weed makes you stupid, well, there ya go.