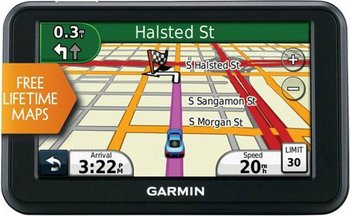 I've been a Garmin GPS user since 2005, so believe me when I say that I know my way around a GPS. The current unit I own is the nüvi 40LM model, seen right. The "LM" by the way means "Lifetime Maps", so when buying a Garmin GPS, always get one that has "LM" in its model name so you don't have to pay for map upgrades.

Why as a gigging musician do you need GPS?

Some clubs, venues and other places you gig will be in really weird locations

I have gigged in places that would be next to impossible to find even with printed directions from Google Maps. There are some spots so tucked away that you're amazed anyone could even find the place. There's been several times I've said to myself, "Wow, I'm glad I had my GPS" when arriving at certain locations, because I know I'd never be able to find it from a printed map alone.

Driving at night sucks and always has. And of course, most gigs are played after the sun goes down. During the day when the sun is out, sure, it's usually easy to get around. But once nightfall comes, things that did look familiar are all of a sudden unfamiliar. Any landmark or road sign that's not lit cannot be seen unless you're pointing your car's headlights directly at it (which of course you can't do since you have to stay on the road).

Drive with GPS and you save money on gas. The best example I can give of this is what happens when things don't go according to plan.

You drive to the gig and get there with no problem. After the gig, you pack up and start to head back home. During the trip back home, you're driving on the highway and up ahead is an accident where you're forced to take an exit ramp to somewhere you've never been before. With GPS, this isn't an issue because the nüvi will recalculate the route automatically and get you back home. But without GPS? Yeah, your printed map is worthless at that point. You'll be wasting gas from driving around for a good 15 to 30 minutes trying to find a way around the accident and get back on the highway.

How to get ultra-precise directions with a Garmin nüvi

Note before continuing: This is going to seem like a really long-ass way of doing this, but believe me, getting to gigs this way will not only save fuel but also save your ass from getting lost many, many times. It's totally worth it to learn how to do this stuff.

I purposely recommend Bing Maps because it's easier to get coordinates there instead of using Google Maps. You'll see why in a moment.

The example location I'll be using here is Pegasus Lounge in Tampa, Florida. 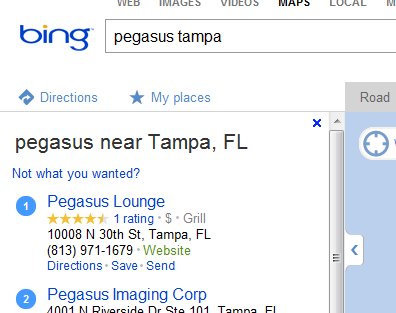 The default view is "Road". Switch that to "Aerial", like this:

Step 3. Zoom in tight on the location

Okay, this is where things get a little tricky.

I zoom in, and this is what I find: 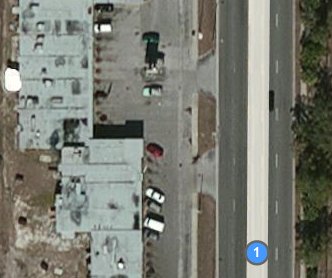 The "1" is the location where Bing Maps says the place is. Well, obviously it's not in the middle of the road. It's not on the right side of the road because there's nothing but trees there, so it has to be on the left side in that group of buildings. I see two spots where I can enter with my car, so I'm going to mark one of those to get my coordinates.

IMPORTANT NOTE: Whether you use Bing Maps, Google Maps or whatever-maps, many addresses are like this unfortunately. Businesses are typically located in plazas and parks, so what internet maps show you are "close-enough" directions. Unfortunately that's just the way it is, but we'll get around that. Keep reading.

Step 4. Right-click a spot to get the coordinates

I know one of those two entrances is going to get me where I need to be, so I right-click the top one (there's more room to park there) to get my coordinate. A little red dot appears on the map where I right-clicked, and a box also appears giving me the coordinates I need:

Step 5. Enter the coordinates in the nüvi

Okay, now it's time to punch this into the nüvi so I can navigate exactly to that spot.

Note: The directions shown below is how MOST nüvis work. Yours may have menus that are slightly different, but the end result is always the same (which you want it to be). 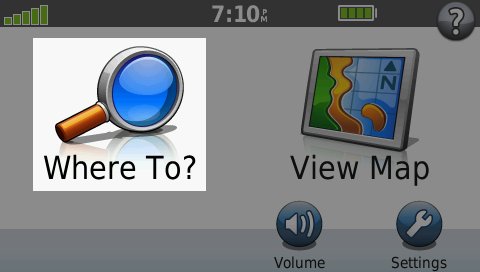 Second, "Coordinates" (you may have to press a down arrow to see this) 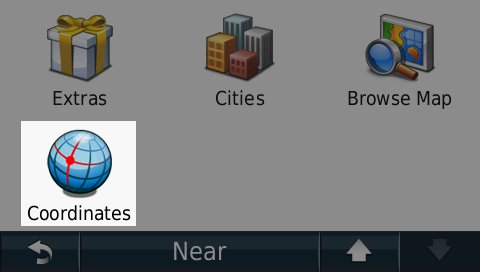 Third, "Format" (at bottom), and change to "h ddd.ddddd" so you can enter the numbers just like it shows on Bing Maps, then "OK". 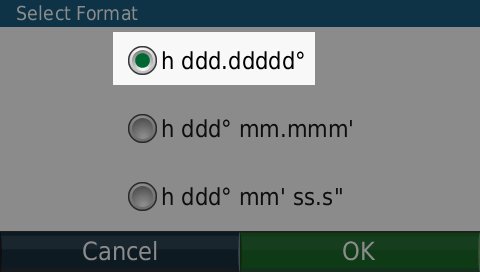 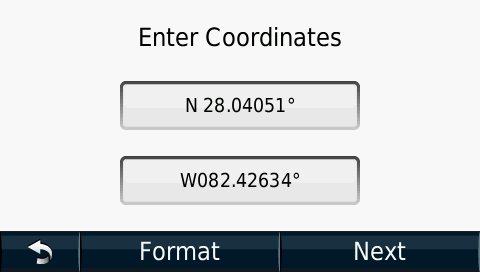 And yes it is true you'll only be able to enter 5 digits after the decimal point and not 6 as the Bing Map coordinates show. Don't worry about that as it's still very precise.

After that, touch "Next"

At this point you'll want to examine the map to make sure you've got the right spot. If the streets match up with what you see in Bing Maps, you're good to go. 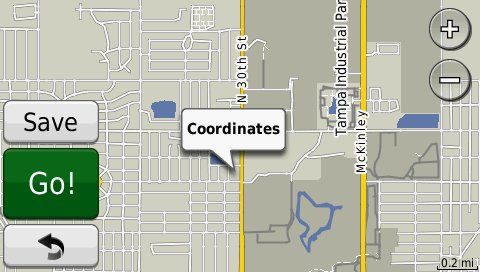 After examining the map to make sure the right spot has been mapped, touch "Save" 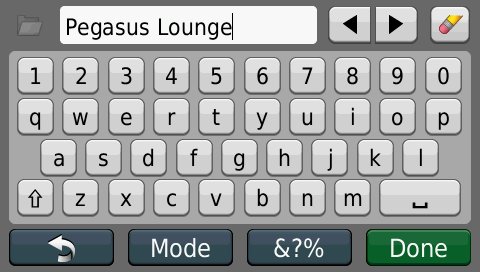 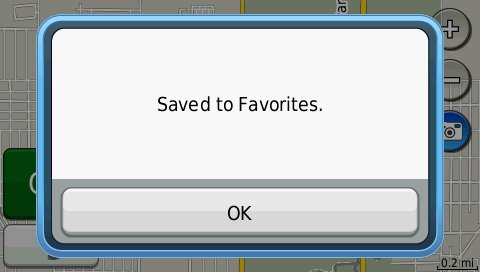 Why is it necessary to map locations like this for your gigs?

From above you saw that named addresses - especially for businesses - don't usually point to where you're trying to get to. But with coordinates there is absolutely no question of where the GPS will take you.

Another reason to use coordinates is for parking. Sometimes there are gigs where the parking is in the back rather than in the front, and you have to go down some special access road to even get to the back of the building where the parking area is. Obviously, that's not listed on any map because it has no defined address, so coordinates are basically the only way to get directed to places like that.

Is a smartphone GPS as good as a Garmin nüvi?

No, and it never has been.

Smartphone GPS works and I'm not saying it doesn't. But a Garmin nüvi GPS is true real-time (it updates its location every 3 meters or less, which is super-accurate), uses true from-satellite positioning while many smartphones do not, doesn't run the risk of crashing like a smartphone does (on many smartphones, if you receive a text or call while navigating using the phone's GPS, that can crash the phone's OS almost too easily), and of course the nüvi is way, WAY faster at calculating and routing to destinations.

I consider smartphone GPS "fair" at best. Yeah, it works, but not like a nüvi does. Any nüvi made from 2010 or later runs circles around smartphone GPS in basically every way. I know that ticks some smartphone owners off when they hear that, but it is the truth. This is why iPhone owners to this day prefer Garmin nüvi over the iPhone's way of doing routing (even before the crappy map app Apple has now in iOS 6).

Simply put, you need a dedicated GPS in the car, and it should be a nüvi. The smartphone is great for texting, talking and so-so navigation, but when you want the good stuff, you go Garmin.

Again, remember, this is coming from a guy who's been using Garmin GPSes since 2005, taken trips over 1,000 miles with them and has navigated to gigs with a nüvi that a smartphone would never find even on its best day.