Why I hate new cars 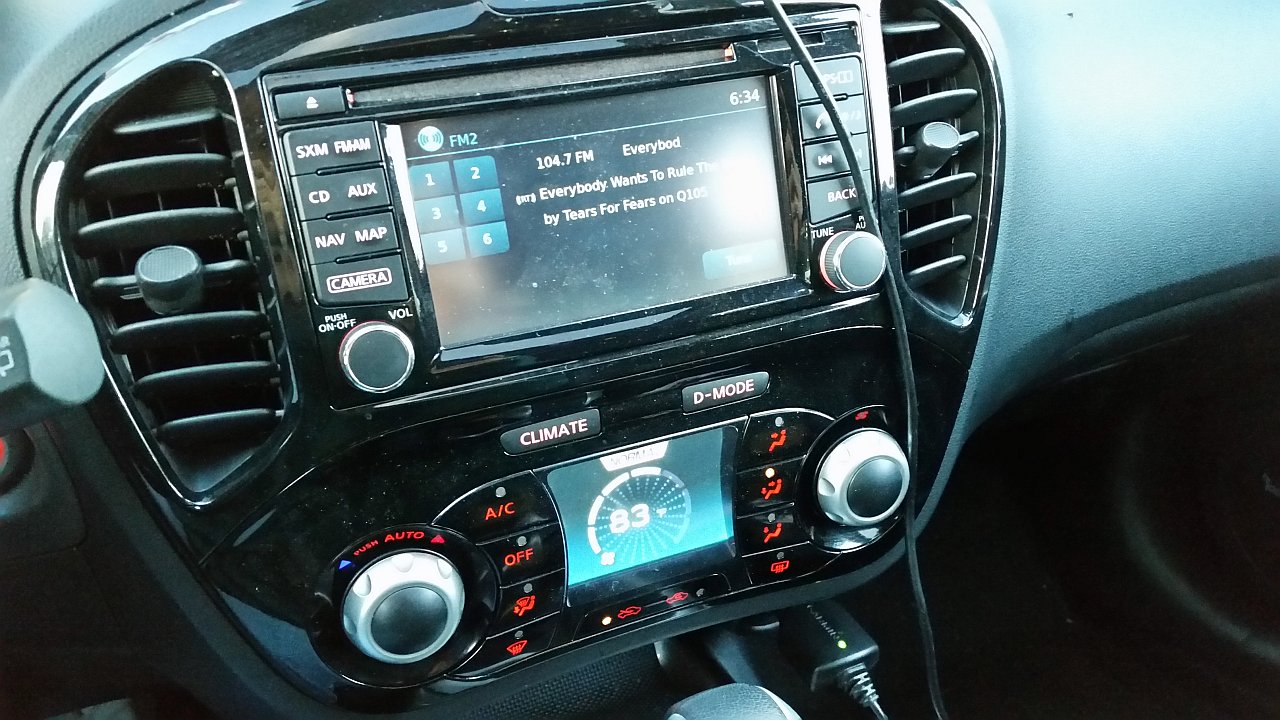 This is where I go into Old Man Mode, but there are many younger than I that I'm sure feel the same way.

At the time I write this, my car is in for service and my loaner vehicle from the dealership is a Nissan Juke, a very annoying vehicle.

The Juke is a car no longer made by Nissan for North America, but it spells out a lot of what I hate about new cars. The stamped plate on the door states the car was built in December of 2015. It's March 2018 as I write this, but there aren't that many differences between a '15 and an '18 car.

Let's start with the HVAC controls that I have a photo of shown above. Absolutely infuriating.

Someone at Nissan thought it a wonderful idea to replace simple, usable dials that worked perfectly and told you everything you wanted to know with a little electronic screen that washes out easily and becomes unreadable in sunlight. The fun part is when that screen fails (and it will,) all HVAC controls are then unusable. Yes, ALL of them. Those dials on the left and right won't tell you anything by feel. When that screen goes dead, you're screwed.

For the larger screen above, note the glare on that one. That's normal. It makes the backup camera absolutely worthless. You are better off looking behind you...

...IF YOU COULD ACTUALLY SEE BACK THERE.

The Juke's rear glass is comically small. Both headrests for the rear seats and the rear wiper arm also block visibility. But wait, there's more! Or rather less. The absolutely gigantic C pillars block 100% of any rear driver or passenger side visibility. You are totally blind when backing this car up.

Then there's the whole sitting-in-a-tub thing. You cannot rest your left arm near the bottom of the driver's window because that's been raised. "For safety," of course. All the windows are shrunken and small, and you feel like you're sitting in a dark cave.

On the Juke are 17" wheels for basically no reason other than for style. This car could have easily been outfitted with 16" or even 15" and nobody would have noticed. Having 17s does nothing but make tires for this thing more expensive to replace.

No. But it's becoming more difficult every year to find any new car worth driving anymore.

Now to be clear, all cars suck. There is no such thing as a problem-free vehicle. Cars these days are designed to break well before 100,000 miles and have been that way for years.

My main issue with new cars is the needless junk introduced that nobody asked for nor wanted.

Here are a few of them:

The best brake setup for passenger cars ever invented was power assisted disc/drum with anti-lock. That's the setup that works very well for regular cars, and the cost to maintain it is at least somewhat reasonable...

...which is the fundamental reason why disc/drum is better than disc/disc. It has nothing to do with stopping performance and everything to do with cost. People don't maintain brakes because disc/disc has a steep maintenance price. This is why even lightly used cars even with just 35K miles on the clock have brakes that squeal and screech when coming to a stop. This is NOT NORMAL no matter what anyone says.

It wasn't until the 2000s that cars with wheels over 15" in size became normalized. Prior to that it was normal to see anything from small cars to full-size pickup trucks with a 15" wheel. Only the sports cars like the Corvette had a larger wheel.

Now we're seeing bigger wheels on everything for literally no good reason. The Juke as mentioned above has 17" just for style. The 17s certainly don't make it ride any better.

These things do not make a car safer and never did. The 2008 NHTSA study on this concluded that for vans and light trucks (but not cars,) DRL only decreased severe collisions by a pathetically low 5.7%. This means DRL isn't making your driving any safer but instead costing you by burning out your headlight bulbs faster. DRL also requires a sensor to work properly, which is another needless dopey electronic thing that will fail.

Electronic screens of any kind

Price out any replacement electronic screen for any car, be it in-dash or gauge cluster, add in the cost of labor to replace one, then add in the cost of the dealer to reprogram one, and you'll understand quickly why these are dumb.

Smartphones and dedicated GPS units are cheap to replace. Automotive screens are absolutely not.

A look back at something that made perfect sense

I'll concentrate on just HVAC (which means Heating, Ventilation and Air Conditioning) here just to show how good things used to be.

The Juke's HVAC controls are, obviously, atrocious. Horrible design, horrible ergonomics and expensive to replace when it breaks.

We need to rewind the clock all the way back to the early 1990s to see something good: 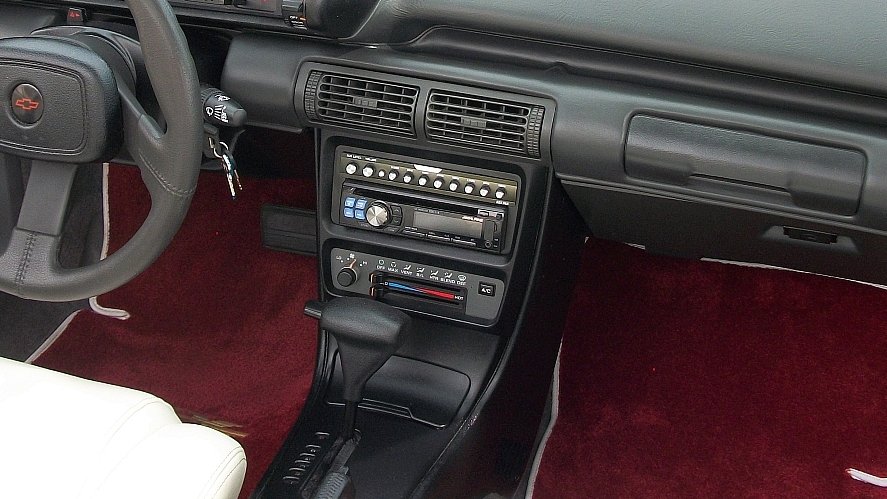 That, dear reader, is a perfect HVAC control cluster. Yes, it's a GM. Specifically, a 1992 Chevrolet Cavalier interior. While there is an aftermarket radio there, below that is the example of HVAC perfection. One knob with ring switch, two levers, one A/C button. That's it. Those 4 things controlled all the interior air flow and air temperature in the car.

What makes this setup perfect is that you can operate it 100% by feel alone. You don't even have to look at it to use it. The top lever has "click" areas for where you want air flow to be delivered, the bottom lever is the temperature setting, the left ring switch the fan speed setting, and the button on right is A/C on or off.

This specific HVAC cluster is something GM used from the '60s up until about 1994, then changed over to dials, knobs and then implemented the needless electronic buffoonery we have today.

The thing to take note from here is that controls in a car should never be something you have to think about. They should be as dirt simple as possible and just work. That's what the pre-1995 GM HVAC controls did oh so well for most of their cars and trucks. There was no thinking needed just to get some warm or cool air moving.

We lost this simplicity. And that's sad.

Are we better off restoring old cars?

I'm not going to say "someone needs to start building simple cars again" because that's just not happening. We are past the point of cars going back to making sense. The future is nothing but dopey electronic screens and cave-like interior cabin spaces. Fun, fun, fun, eh?

When you want something good, you've got to go old. But not necessarily antique.

Something I've been seeing more of are people restoring regular cars, as in the daily drivers of the past and not the collectibles.

Nobody 10 years ago would even think of restoring a Chevy Cavalier (which by the way ended its run in 2005.) But now as newer cars keep getting stuffed full of more expensive electronic junk that Joe Average can't fix nor replace, those old Cavaliers are starting to look pretty nice now. Yep, they're slow. But better to have a slow car that's paid for and more importantly works.

If I had the money, I would have no hesitation whatsoever to restore a car from the early '90s and use it as my daily driver. The cost for the car and all the fixings would probably be no more than $5,000 - for everything.

Collectible cars take a lot of time and money to restore, but not the regular daily drivers of the past. One can easily have a '90s daily completely restored in 3 months. Maybe even just 1 month if you were really good at planning all the repairs. Restoration is quick because it's not like you have to go searching for "matching numbers" drivetrain components or use exact-year parts.

I'll put restoring an old '90s GM on my to-do list, and who knows? Maybe one day I'll have the cash to do it.