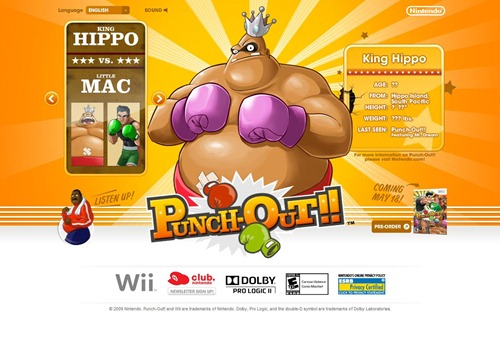 Y'know it's not very often where I see a game and say to myself, YEAH.. I WANT THAT.

Punch-Out!! for the Nintendo Wii is one of them. It will be released tomorrow. I don't own a Wii, nor can I afford one at the moment.

What got me more than anything else was the theme song to this. I remember this title as Mike Tyson's Punch-Out!! for the original NES - and back then it rocked in all its 8-bit glory. But now.. whoa. Same song, full soundtrack with real horn section.

Hear for yourself (sorry, link is broken)

It's nothing short of incredible. Nintendo rarely has a theme this "organic" sounding. It is a genuinely exciting song.

Even though I can't buy this game (or system) now, it's definitely on my to-do list. If I ever get a Wii, this will be the FIRST game I buy for it, no question. Followed by Super Mario Galaxy.