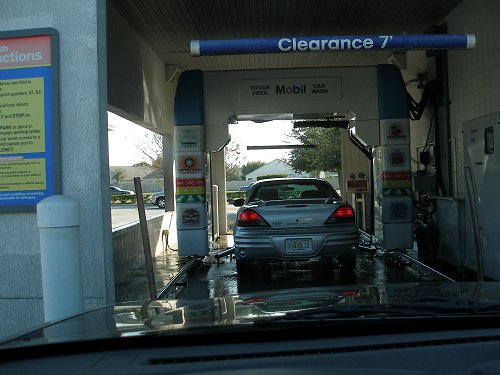 Something interesting about car washes in Florida (and other warmer states most likely) is that one or both sides are wide open. Note the huge opening to the left. The above is one of those touch-less washing stations at a local Mobil in Riverview.

And because I don't feel like writing a separate post, I'm going to note other happenings that have been going on here. 🙂

My BenQ FP202W 20-inch monitor arrived today. I like it a lot. Works very nicely with DVD movies and for regular computing stuff it also works exceptionally.

The funny thing is that 20-inch doesn't seem as big as you would think it'd be. I mean, yeah, this is a big monitor, no doubt about that, but it's nice that it doesn't have that colossal factor to it, i.e. it's usable and not a big paperweight.

Many reviewers of this monitor state it's very annoying that all the control buttons (for color, brightness, etc) are on the right and not visible. I have to agree with this; that is a bit annoying. But as almost all the reviewers also said, once you have it set the way you want, you never have to adjust it afterwards, so it's a minor trade-off.

This is the first time I've used a DVI input instead of regular VGA style. This monitor does both, and you can choose which input you want on the fly with the OSD (nice touch), so you can effectively have two computers plugged into this thing. I notice the difference between DVI and VGA almost immediately. Fonts are clearer, DVD picture is better and so on. It's nice to have.

I was fortunate enough not to receive this monitor from NewEgg with any dead pixels at all, however, we'll see if it still doesn't have any after a week. Normally if any dead/stuck pixels happen, it happens within the first week or so of use. Crossing fingers. 🙂

It's December so people have started putting up Christmas lights and decorations. I find it weird. Why? Because it's sunny and lovely outside. It isn't cold at all. This is yet another one of those things that my brain has to get used to. When I see Christmas decorations I think "cold". But it isn't. And that's perfectly fine with me. 🙂

Last night I had to rebuild my big box with an entire new installation of Windows XP which took way too long, but it had to be done. Because of this I couldn't do any video editing. I have three projects I need to get done today. They will be done, I have no doubt of that, but I would have preferred to start on them yesterday. Oh, well.