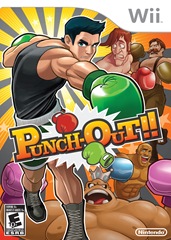 My sister bought me Punch-Out!!, a game I've wanted for a long time. Is it good? Yes, very good. The game looks, plays and acts exactly as if you were in a cartoon - and that's awesome. Furthermore, it has a 100% arcade feel to it which is even better. Wow, did Nintendo nail it good with this title.

I realized something when I was playing the game console-style. This was literally the first time I'd actually sat down in front of a television just to play a video game in about, oh, 7 years. Maybe longer. And when I say play I mean play.

Since I bought my Wii I have been using it actively, but never sit-down style. The thoughts that ran through my head were "Wow, this is cool" and "Wow, it's been forever since I've done this."

And let's not forget that playing console style on a Wii is almost identical to how an NES was played back in the 80s. Same rectangular controller. Same button placement.

Punch-Out!! is childhood relived. The game, the characters, the play style, how you play it, everything.

Two big thumbs, or rather fists, up.