Per a recent article I wrote where I talked about CDs, I decided to do three things. First, buy a 100-pack of blank CD-R discs. Second, rip the existing CD-Rs I have from the 6-disc player in my vehicle. Third, burn some new discs with some new tunes.

In my 6-disc changer I only had 3 discs of tunes that I didn't listen to often because, well, it's old stuff. I unloaded those discs, ripped them, then made some new discs.

I found the only one that does the job right the first time concerning audio CDs is Windows Media Player 12. It rips audio properly and moreover burns audio properly with the least fuss. You don't have to mess with CUE files, don't have to worry about whether it's an MP3, MP4, WMV or WMA, etc. Just put the files in a playlist, pop in a blank disc, burn it and you're done. 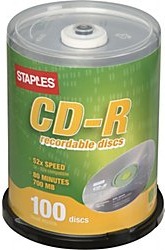 I have no need for CDs other than for making audio discs for my car stereo. Fortunately the discs were cheap as the 100-pack was - get this - $13.90 with tax included. They're Staples brand CD-Rs (pictured right) but are the 52x-capable 700MB 80-minute kind, meaning that while cheap, that's as good as it gets.

CD-Rs that are truly junk are the kind labeled as "for music". These are easy to spot because they have a max write rate of 32x or 40x. I've made the mistake of buying those before and they just suck. A CD-R that is 52x-capable has to be manufactured better otherwise it simply won't work, so if you have to buy CD-R discs for whatever reason, go for the 52x kind.

I mean, it's not like you have to spend extra to get 52x, at least not at Staples. $13.90 is the least amount of money I've ever spent for 100 discs, and for audio CDs these work out just fine.