I'm going to admit up front that this is going to sound really dumb, and probably funny to some, but whenever I make discoveries like this I have to write about it.

For many years I did not use soap when I showered because it simply wasn't necessary. Water and cloth or brush seemed to get the job done just fine, I used the suds from the shampoo to wash up with, I didn't stink afterward as far as I knew, and just went about my business.

In my 20s this thing called body wash arrived on the market. Prior to this it was only for women, but now there were wash gels for men. I bought some and used that ever since - all up until last week.

From my father I got two bars of Zest still in the box. For a while I didn't know whether to use them or throw 'em out. I finally decided to use them.

I get in the shower, break out the Zest, and it was amazing. Plain ol' deodorant bar soap cleans so much better than body wash does. It was like I had discovered the most awesomest thing for washing in the history of washing oneself. After showering, I can honestly say I hadn't felt that clean in.. well.. since probably the last time I used bar soap. 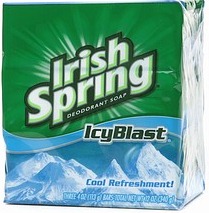 Being I just had to have bar soap now, and don't particularly care for the scent of Zest, I trotted on down to Walgreen's to get some Coast. In the back of my mind I remembered Coast smelling pretty good. Walgreen's didn't have any. They did however have this new thing called Irish Spring "Icy Blast". Well, that sounded cool so I bought a pack of 3. I was a little unnerved by the fact this Irish Spring is blue and not green, but it's an awesome scent and cleans just like it should, so I'm an Irish Spring man now.

When going to buy this stuff, I tried to remember if I had ever bought any bar soap before. Nope. This was my first time.