sticking with what works part 2

I mentioned before that I have a "trademark" video editing style. It's something that's catching the eyeballs of quite a few people out there in internet-land, so this is a follow up to the previous post because putting videos together isn't just about zooms and pans.

I am trained in how to properly write scripts and piece together presentations using industry standard broadcast methods. The word you need to pay attention to is broadcast.

Continuity is something which is either something you understand or you don't. Unfortunately, most videographers on the internet don't. In a basic sense, it's the feel of one fluid motion between two separate shots. In an advanced sense, it's the continuation of a thought or idea thru several shots where the viewing audience doesn't feel lost and/or confused.

There are visual continuity errors, such as an actor that is looking one way in one shot, and in the next cut is facing a different direction. That's a break in continuity and it's bad.

Other errors crop up due to the fact the videographer doesn't know how put a thought to the screen properly. Ones I see often are shots that are way too long or way too short. The overall flow of the shots is bad, and any idea the videographer was attempting to put to screen is lost because of bad editing choices.

Even if you have a full studio with a set, correct lighting, correct audio, a crew and an all-pro setup, a poorly composed shot wrecks the presentation.

The most common error? Heads that are too high.

It is (supposed to be) common knowledge that when you place a subject such an as actor on screen, the top of his head should be at least 8% to 10% below the top edge of the frame, or at bare minimum have the subject's eyes appear to looking directly at you, not down at you. This applies to both videography and photography.

Remember how I said that even the pros get it wrong sometimes? 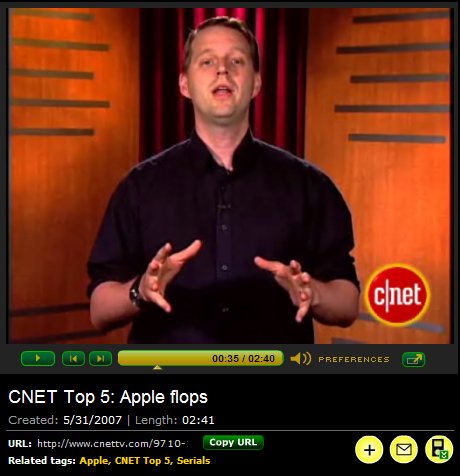 What's the first your eye draws to? His hands. This is 100% flat-out bad shot composition. This is a speaking subject that is doing nothing but speaking, meaning you're supposed to be paying attention to his face, because that's where the words are coming from, NOT his hands.

Had the shot shown the subject's head lower in the frame and zoomed in tighter, it would have been fine. But it's not.

Are there more flaws in this shot? You betcha.

The set is orange/red colored. This is bad. Going anywhere near red is a huge no-no because it appears to "fuzz" on screen.

The subject is wearing a black shirt while standing in front of a brightly colored set. We're supposed to be paying attention to the subject, not the set.

The set gives the appearance the subject is standing in a locker room. Not very inviting for this type of video.

The red curtain backdrop looks like he's standing in a place south of heaven.

The subject is wearing a watch. That's gotta go.

CNET, if you happen to read this, your video team either needs to go back to school or be fired so you can hire people with true broadcast skills. If I had the equipment you guys have, sheesh.. I could compose the next Star Wars with the stuff you have at the ready.

Or if you don't feel like firing your video team, here's what I suggest:

1. Put the subject in a GRAY shirt next time.

3. Tell the subject to ditch the watch.

And by the way, if you want to see well-composed video, just see Sonic State's Top 20 Synthesizers. That is a 100% spot-on perfect show. Watch the subject, watch where his head is and take notes because these guys did it proper - all of it.

Here's a screen shot of that one. Notice the differences. Even in places where the head is chopped off, the eyes are in the correct spot every time. 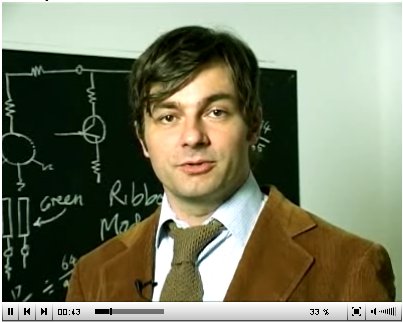