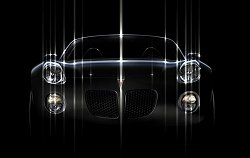 Today I will be going with Pop over to the local Pontiac dealership to check out the Solstice; a cool little two-seater roadster. Will I buy one? Maybe. More on that in a moment.

I currently own a 2005 GMC Canyon SLE extended cab. The truck is great and it has served me very well, but the fact of the matter is that I have no need for a 4x4 truck here in Florida. When I lived in Connecticut I loved it because I specifically bought it for winter driving. But now the truck seems like a fish out of water here. Add to that I've been getting the bug to get a car with some sun and fun to it, so.. why not try to get a small car that fits the bill?

Small note before continuing: A huge advantage of Florida living is that you can drive basically anything. Other than hurricanes, the only "major" weather you worry about is rain. So if you want to have a rear-drive convertible as your primary car, it's okay. You could never have that type of car as your primary wheels in New England because there'd be four months (on average) out of the year you couldn't drive it. Rear-drive convertible + New England = Bad idea.

The two cars I'm eyeing right now are the Mazda Miata and the Pontiac Solstice.

I like both cars but I'm leaning towards the Solstice because it has a fresher look to it. Just seems to have more character to it.

Price-wise the Solstice is probably more affordable because I already own a GM product. I would get an "owner loyalty" discount if I stayed with GM. The only trouble is that I owe quite a bit on the Canyon still, so I'm not putting my hopes up too high.

I'm just hoping the Pontiac dealer I go to today actually has one. Hopefully they will. I look forward to test driving one (even if it turns out I can't afford it just yet).

Today's excursions to the car dealerships today were as expected. The end of the story in case you don't want to read the rest: No I am not getting a new car - and to be honest I'm not disappointed about it at all because it was a long shot at best.

I test drove a Scion tC and I liked it - but the figures didn't work out whatsoever even with the low price tag. The reason I tried out the tC is because the car has a ton of features packed into it (including a standard dual pane panoramic sunroof and standard A/C) and it looks fairly decent. But as I said, even with the low tag the numbers didn't work out in my favor.

At the Pontiac dealership I went to there were absolutely no Solstice's in stock at all. Evidently they're selling very well. This is all well and good anyway because when I talked price with them they wanted way more than the car was worth due to its popularity.

No thanks. I can wait.

(Note to anyone looking for a new GTO: There are plenty to go around. These cars are not selling, so if you can afford the tag you should be able to get a great deal on one.)

Because of the sticker-shock I encountered at both Toyota and Pontiac I'm not even going to bother with the Miata.

So... being that the Canyon and I will be together for a while, I will be adding some stuff (once the warranty runs out) to my truck which will cost far less than a new car. Over time I will be adding a sunroof, a bedliner, some new tires and replacement speakers for the radio (two of them are semi-blown).